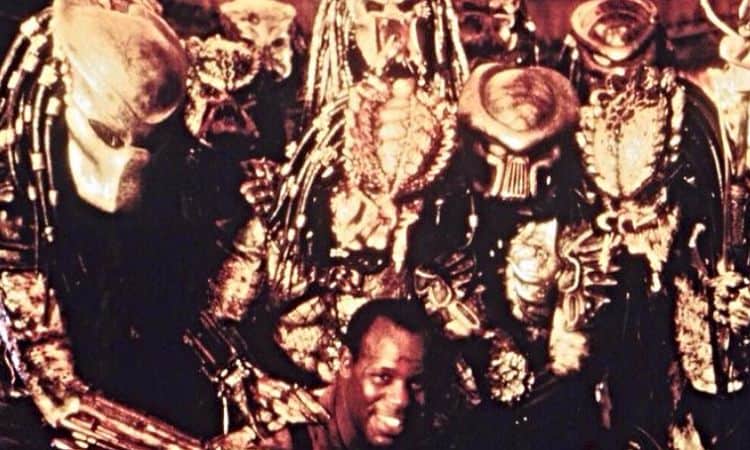 Is that part of how the predators stay in such great shape, they have choreographed dance numbers? It would make a certain amount of sense, wouldn’t it? Well, at least until Danny Glover came in it would. But this behind the scenes outtake is something a lot of people probably haven’t ever seen, meaning that it’s something that’s considered a bit of a treasure since a lot of material from the 80s and 90s are likely to be thought of in this way since anything that wasn’t revealed back in those days is now considered vintage. In all fairness, Predator 2 wasn’t given the same kind of consideration that its predecessor was for several reasons, but then the first Predator wasn’t really given much of a chance either. Despite that, both movies are very entertaining and yes, pretty bloody when you get down it. But that’s the nature of the movie and the creature, known as the yautja, that are seen to hunt human beings. All people really knew was that the creatures were vicious and that there were likely quite a few of them since even in the first movie it could be seen that a smaller ship broke away from the main vessel. The idea of course is that the yautja send their warriors out to hunt as a type of trial that is used to make them prove themselves. They take on the most dangerous species they can find on a planet and hunt them to prove that they’re mighty warriors.

What’s really amusing though is that the two movies aren’t the first time that the yautja have made their way to earth. By the end of the second movie we found out that they’d been coming to earth for quite a while, and of course, by the time Aliens vs. Predator came around we discovered that they’d wiped out entire civilizations when their hunt for the xenomorphs, who they consider to be the toughest prey around, went wrong. But in part 2 we still knew little about them other than that they were hunters, they were vicious, and they weren’t exactly evil, but they weren’t too friendly either. It wasn’t really until AVP that it became obvious that they had a sense of honor to them, but it was far different than what humans perceived when using the word. The yautja definitely have their own codes of conduct and their own way of surviving, but to humans, it likely feels a bit primitive, while on the other end to the yautja, humans appear weak and somehow kind of odd. The highly aggressive aliens are undoubtedly advanced beyond human understanding in a lot of ways since they use technology and weaponry that is simply too hard to reverse-engineer, and the fact that they navigate space the way that humans navigate the seas is even more evidence that they’re superior when it comes to technology. That’s not too bad for a race whose faces look like mutated crabs. But if anyone has noticed, there are moments of levity in the Predator movies as well that kind of break up the tension now and again. They’re not so horribly cheesy that they don’t fit into the dialogue, but they do manage to give people something to chuckle at amidst the horror that’s going on throughout the movie.

For instance, the same line in both movies, “You are one, ugly, mother******” tends to elicit a chuckle from the audience since it’s the absolute truth to be certain, but the mimicry that the predator in the second movie finishes the sentence with was funny enough since the creatures do attempt to mimic human speech. With the technology they possess, it’s been seen that they can record and playback various snippets of conversation they’ve heard, but their command of the English language isn’t all that great and comes out sounding as though they’ve been gargling with gravel. But again, that’s part of the humor since it wasn’t fully expected. Neither was the gift that the lead yautja gave to Glover’s character before the ship took off in the second movie, along with the line “Take..it”. ‘It’ referred to an old, antiquated pistol from the 18th century, indicating to the audience at that time the fact that the yautja had been making earth their hunting ground for a long, long time. At that point, Glover’s character had no doubts that they would come back, but perhaps like Schwarzenegger, he didn’t fancy being a part of another movie in the years to come. It would explain why we’ve seen entirely new casts for the last few movies featuring predators, though to be fair, not all of them have been that great, even when utilizing faces that are well known to the public. But hey, at least we have this dance number to fall back on for a good bit of fun.