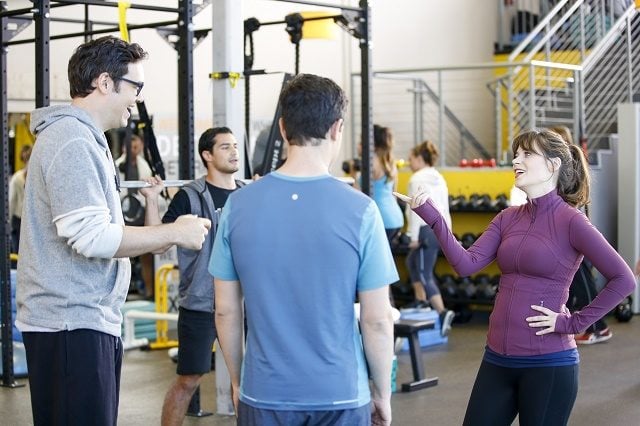 Due to the World Series and the 2016 election, it’s been nearly a month since FOX has aired a new episode of New Girl, and I, for one, have missed the loft gang. There’s just something so welcoming and exciting about having a show like New Girl to look forward to every Tuesday night, and especially with the division occurring right now in the United States, I’m incredibly happy to have this fun, goofy show back in my life.

And “fun” and “goofy” are the perfect words to describe most of “Ready.” Tonight’s half hour is similar to New Girl‘s last new episode, “Jaipur Aviv,” which aired back in October; like that installment, it’s pretty light on story and big moments, opting instead for different but dynamic character pairings that allow most of the members of the loft to be their weird, neurotic selves. I mean, this is an episode where Nick spends most of the half hour trying to decide whether or not the new bartender Cece hired is good looking, and where Winston has to constantly reject beautiful women that keep hitting on him because his confidence is just too much for them to handle. It’s totally ridiculous and absolutely wonderful.

Even the central story in “Ready,” which focuses on Jess’s attempts to get back out into the dating world after claiming that she’s over Nick, are milked more for comedy than any type of new or insightful revelations. Schmidt yet again encourages Jess to explore things between her and Robby after he sees the two of them interact at the gym. Jess acknowledges that she and Robby do have a lot in common and the he’s funny and “as tall as you can be before it’s weird”; however, she’s still searching for a spark between them, one that never comes as she she awkwardly flirts with him over shakes they get at the gym or as she dodges his initial attempt to kiss her after their first date.

Really, for the most part, the Jess/Robby storyline feels as if it’s taken from New Girl‘s first season, which featured many of Jess’s misadventures in dating, especially as things continue to become even more awkward and outrageous throughout the half hour. Not only does Jess and Robby’s first kiss go awry (aside from the lack of a spark, the bar ends up falling on the two of them as Jess tries to kiss Robby while he bench presses), but she also ends up hurting him even more when she sits on his leg in the hospital, further injuring his already damaged knee.

With Robby in a wheelchair for the next few weeks and his face bloodied and bruised all as a result of her actions, Jess can’t find it in herself to tell him that she doesn’t feel a romantic connection with him and ends the episode pretending to care for Robby in that way, at least until he’s able to walk again. Although Jess does come to a big realization here, recognizing that she’s ready to date again even if Robby isn’t the right guy for her, it’s mostly all just played for laughs, and the closing moments of the episode suggest that New Girl plans to milk even more comedy out of Jess and Robby’s awkwardness for at least one more episode. I just hope the writers don’t try to over-extend the storyline past its worth, though, because while I enjoy the silly friendship between Jess and Robby, I can’t see him being a major player for the rest of the season and would rather watch Jess explore her feelings for her Nick or try dating other guys that she’s actually interested in.

Even though Jess’s big leap back into the dating pool gets the most attention in “Ready,” it’s certainly not the most significant storyline from the episode. That credit would have to go to Cece’s major decision to start managing male models, a career that Nick and Winston encourage her to take on after they witness her re-negotiate a contract for her model friend and the bar’s new bartender, Donovan. Throughout “Ready,” Nick tries to get Cece to take on a bigger role on that bar, telling her she’s “manager material,” and that it would be a good position for her; however, he admits that she’s better than what the bar has to offer after seeing her demand that Donovan get paid more for his first official modeling gig. Cece naturally embodies the role of a talent manager, and it’s apparent to anyone watching her that this is what she should be doing with her life.

While Cece will still remain a bartender at Nick and Schmidt’s bar (because she says she needs the money and because it makes sense that New Girl would give her another main setting to be in besides the loft), her new career as modeling manager is an exciting development, one that fits her character in a way that none of her past job decisions really have. Cece quitting modeling and joining Nick at the bar a couple of seasons ago made sense on a practical level for New Girl as a show (the characters were always hanging out at the bar anyway, so why not have Cece work there?), but that decision, along with her choice to quit school earlier this season, left Cece pretty afloat while the rest of the series’ characters found their passions. This move, though, feels very right for her character and also allows New Girl to have a type of full-circle moment, as we now get to witness Cece returning to her modeling roots but in a much more substantial way; I’m very excited to where all of this goes in future episodes.

“Ready” is pretty light when it comes to stories for the New Girl guys, with the most significant of the three focusing on Schmidt, who acknowledges that his marriage to Cece has allowed him to find real happiness rather than define himself by his body and his looks (although that doesn’t stop him from returning to the gym after meeting his wife’s potential, male-model clients). But it’s also one of the funniest episodes of New Girl Season 6, and it features two very satisfying developments for Jess and Cece, one being romantic and the other being professional, that made me even more invested in their journeys this year. Plus, how can you not love an episode in which the cat-loving, bird shirt-wearing Winston Bishop is turning down women left and right? If that doesn’t make you love New Girl, I don’t know what will.

What did everyone else think about this week’s episode of New Girl? Did you miss the show as much as I did? Comment below and let me know.

Jess tries to re-enter the dating world by testing things out with Robby in another wonderfully wacky episode of New Girl.