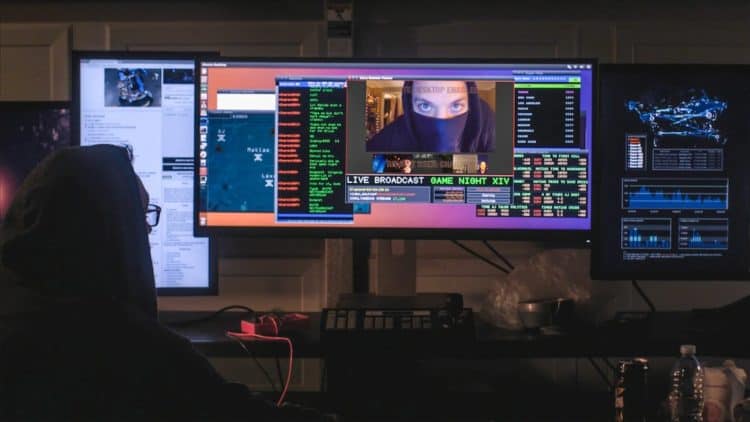 Despite the dependency that people have on the internet and computers, a dependency that continues to grow by the year, there are plenty of movies and shows that make it clear that such a dependency comes with a great number of risks that aren’t wise to ignore. This is made rather evident when Matias, the leading character in this movie, finds a laptop in the lost and found of an internet cafe and takes it home to work with a new app that will allow him to better communicate with his deaf girlfriend, Amaya. As he speaks to Amaya and then gets into a conversation with several of his friends, he starts to become irritated when the laptop starts to experience issues such as freezing up and displaying bouts of static that interfere with their game night. As Matias starts getting messages from someone named Nora who’s looking for Erica, he begins to grow uneasy as the disturbances continue. The real trouble begins when Matias realizes that he’s connected to the dark web and that Norah C. is actually a character named Charon IV, the original owner of the laptop that Matias is using.

Following this story feels like one long IM or Skype session that feels like a cheap way to make a movie since the settings are simple enough and there’s not a lot of demand for other effects that can’t be replicated. The acting is decent, but not so great that one could say that it’s a worthy sequel, since like many movies that deal with horror elements that are several moments when one can’t help but believe that practicality would win out in the real world. But as Charon starts to torture Matias and his friends while demanding his laptop back, Matias becomes an unwitting part of the criminal acts as Charon forces him to act naturally and not speak about what is happening.

The story only becomes more terrifying when Charon begins to mess with Matias’s friends as he takes the clips created by one of them and placed them on the internet and edits them into a clip that makes it sound as though he’s planning a public shooting. When the police are sent to his home, Charon edits another clip quickly and makes it sound as though the friend has a shotgun and is racking a shell, preparing to fire. The police open fire, killing the individual as his friends watch via webcam as he’s cut down by a hail of bullets. Charon continues to target Matias’ friends as Matias watches on the laptop, horrified by what he’s seeing. When asked why Charon and his associates are doing this, the reply comes by way of a clip of Matias saying ‘it’s game night’ that is repeated over and over. This indicates that Charon and those he’s allied with are doing this purely for entertainment, which is beyond morbid. As each of his friends is taken out, Matias ends up laughing hysterically at the end of the movie, finding that he no longer cares what happens to him since Charon has taken everything. When he’s struck and killed, the movie is essentially over, and there’s a feeling of relief, but also a feeling that this movie could have come up with a lot better story, still involving the dark web, that wouldn’t have felt so disjointed.

But where the horror lies is in the idea that there are folks out there who can navigate the internet highways so well that they can end up tormenting those that know a little but not enough to keep themselves tucked up and secure from those that want to harm them for sport. If anything the movie makes it clear that there is no protection for anyone on the internet unless they know how to combat those that are adept at sneaking into the systems of others to do what they will with whatever information they can obtain. The scariest part of this is that those that are adept at moving in and out of the internet at their leisure are rumored to be able to do pretty much anything they want without being caught if they’re good enough.

This movie wasn’t exactly one of the best as it often happens when movies that feature actors who aren’t known to many people have a much harder time getting the type of attention that they need to become a part of cinematic memory. What this story appears to be lacking is a reason for people to really sit down and pay attention to what’s going on. When it’s this easy to get up and move around while keeping the movie on it’s evident that it’s not quite as entertaining as it was intended to be. Plus, if a person can go back and pick up the story easily after stepping away, it’s not nearly as complicated as some might think.