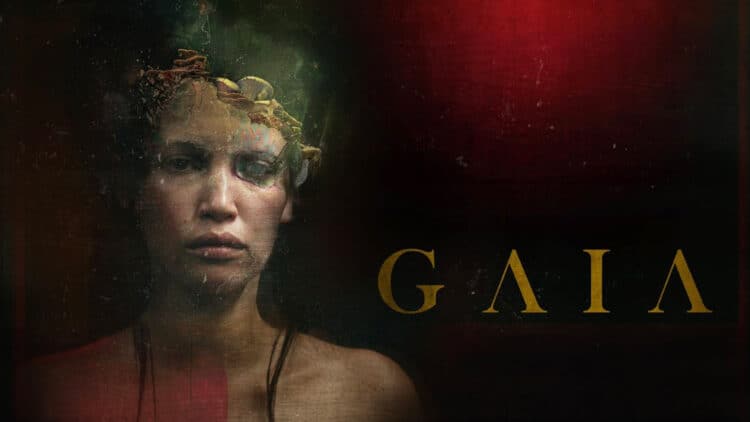 Plenty of movies try to make people care about one thing or another and caring about the world around us while still being terrified at the various legends and myths that have been created is a popular way to get people to pay attention. Gaia is one of those movies that seek to tell a tale that is bound to hit a lot of moviegoers in a lot of different ways. The movie isn’t exactly tough to understand but it does come off as a story that might not have gone deep enough into its own lore, bouncing off the surface ideas and sinking in just enough to make it interesting. Gabi and Winston, working for the park service, are surveying the surrounding forest via drone, when suddenly the drone is knocked out of the air, prompting Gabi to go and retrieve it. Winston is hesitant, but when Gab mentions that they don’t need to leave their trash lying around, he agrees and plans to meet up with her in an hour. A lot of people who have seen various horror movies know too well that this is the moment when things start to happen since splitting up is rarely a good idea.

When Gabi injures herself by tripping a spike trap that was laid by a father and son that live in the woods, she has to hobble her way forward, though, by the time she reaches a wooden shack that she finds deep in the woods, night has fallen. Winston, who goes off looking for Gabi, hears a strange sound in the woods and ends up running from strange, humanoid creatures before he comes to rest against a tree. Unfortunately, he’s infected by a strange type of fungus that moves with a terrifying speed that makes it clear that whatever it is, the fungus is just another part of something else.

Among the many different ideas for a horror movie, fungi have, over the years, become another horrifying threat that many people can’t handle since the thought of corruption and filth freaks a lot of people out. What’s ironic in this movie is that the fungus, as invasive and insidious as it is, doesn’t really come off as a serious threat outside of its environment. Barend and his son Stefan have lived in the woods for many years, as Stefan was born in the wild and knows nothing else. When Gabi comes to care for Stefan though, Barend eventually sees this as a bad thing and despite helping to save and care for Gabi, he’s still of the mind that humanity is less than admirable in their efforts to destroy the world around them. Even with that in mind, however, Barend and Stefan do fight against the strange creatures that were once human but were taken over by the aggressive fungi that live deep within the woods. It does become evident that Barend makes sacrifices to the spirit within the forest that he speaks of at certain points in the movie. The existence of the fungi-covered humans is troubling since they don’t appear to spread throughout the forest, but have a designated area that they tend to stick to.

Eventually, Gabi finds Winston when she and Barend are out walking, and discovers that Winston has been taken over by the fungal growths. After Winston ends his own life with one of Barend’s arrows, Gabi contemplates leaving and going back to the city. But she has grown fond of Stefan, and on top of that, her skin has started to sprout fungal growths that she can’t understand. At some point, Barend comes to resent her closeness with Stefan and becomes a bit unhinged as he starts to become more of an antagonist than anything else. Eventually, Gabi and Stefan leave Barend near the strange tree that he’s been feeding throughout the movie, and return to the cabin. It is then discovered that Gabi is heavily infected by the fungus, and she begs Stefan to kill her. The implication is that he does this and then leaves the forest for the city. One can’t help but think that Stefan might be lost when trying to make the transition, but the credits begin to roll before this is found out.

The movie isn’t that bad to be certain, but it does move at a fairly slow pace and it’s also one that feels as though it’s meant to carry a deeper meaning, even if it doesn’t sink to the proper depth within the story. As a horror story, it does carry a different message than many other movies, but at the same time, this movie does appear to get lost in its own narrative at times and requires that the audience find a way to vibe with the director’s viewpoint to fully understand what’s going on.