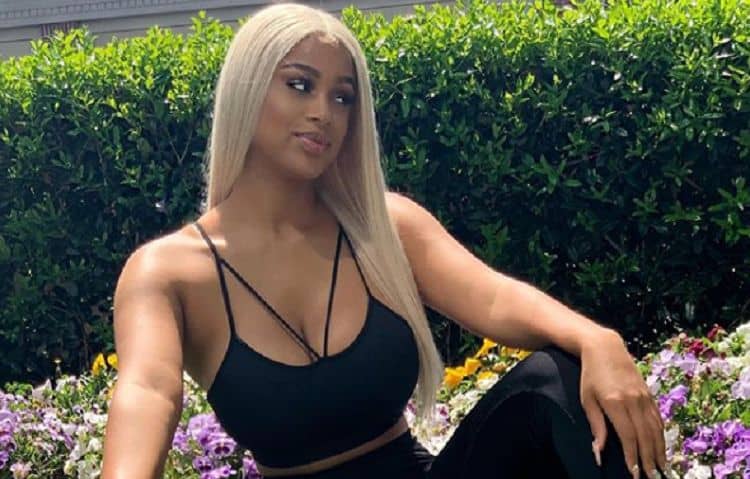 Each season, VH1’s popular reality series, Love and Hip Hop: Atlanta introduces a few new faces. One of the newest people to join the cast is Instagram model, Kiyomi Leslie. The 29-year-old Atlanta resident is a business women and aspiring rapper who is best-known for her relationship with rapper, Bow Wow. Like many other newcomers on the show, Kiyomi has already made it known that she is a boss. Kiyomi will definitely bring a new spark to the show and it will be interesting to see how her storyline unfolds throughout the season. Continue reading for 10 things you didn’t know about Kiyomi Leslie.

Die hard reality fans may recognize Kiyomi Leslie from somewhere else. That’s because she was once a cast member on the WE TV series, Growing Up Hip Hop: ATL. Kiyomi appeared on the show while she was dating Bow Wow and their relationship was the focal point of her story line. Hopefully viewers will be able to see a more personal side of Kiyomi during her time on LHH ATL.

Unfortunately, Kiyomi’s relationship with Bow Wow was full of ups and downs which eventually caused the couple to reach a breaking point. In February of 2019, both she and Bow Wow were arrested after a physical altercation took place between them. Both she and Bow Wow were charged with battery because police were unable to determine which one was the aggressor.

3. Her Father Is Serving A Life Sentence

Kiyomi may be living a glamorous life now, but things weren’t always easy for her. Her father has been in prison for most of her life and is currently serving a life sentence for drug related charges. Although Kiyomi believes that people who commit crimes should serve time, she also feels like her father’s sentence was unjust. Kiyomi says that she didn’t visit her father for the first 15 years of his sentence but is working on having a better relationship with him.

4. Her Brother Is A Professional Body Guard

The cast of LHH ATL has a reputation for being a little aggressive, but anyone who thinks of messing with Kiyomi Leslie better think twice. Her brother is David “Flav” Best who is a body guard for NBA star, John Wall. Best and Wall have been friends since grad school.

Although the name Kiyomi Leslie has a nice ring to it, it’s not actually Kiyomi’s real name. Her legal name is Leslie Holden. She may have been able to keep her government name under wraps had it not been for her 2019 arrest.

Kiyomi Leslie is an aspiring rapper who has already released a song called “In His Feelings”. She also recorded a song with Bow Wow during their season together on GUHH ATL. The song, which was called “Relationship Goals” was never released. However, Kiyomi isn’t letting anything stand in her way. She’s currently working on new music and she hopes to eventually go on tour.

7. She Sucks Her Thumb

Everybody has their quirks. When asked to reveal something about her that other people may not know, Kiyomi Leslie shared that she sucks her thumb when she’s home alone in bed. She didn’t go into any further detail about the habit, but expressed that it brings her comfort.

Most people would probably assume that Kiyomi is a part girl who loves being in the club every weekend. However, that couldn’t be any further from the truth. Kiyomi is actually a homebody who prefers a quiet night at home. She says she doesn’t really like to drink alcohol and would rather avoid the pressure of the club atmosphere.

Although Atlanta has been her home for quite some time, Kiyomi Leslie is originally from Johnson County, North Carolina where she was born and raised. It’s unclear when she relocated to Atlanta but it looks like she moved there some time after 2004.

10. She Used To Be An Exotic Dancer

Kiyomi Leslie used to work as a dancer while she lived in North Carolina. She worked at an establishment called “The Men’s Club of Raleigh” which she filed a lawsuit against in the fall of 2014. According to the suit, Kiyomi alleged that the club had “misclassified” Kiyomi and other dancers at the club as contractors instead of employees which resulted in them not being paid fairly.