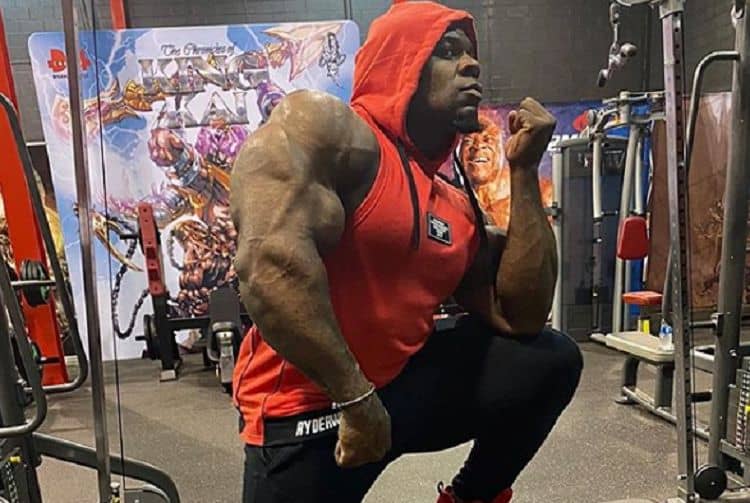 American IFBB professional bodybuilder, personal trainer, artist, and actor Kai Greene is one of the biggest names, and biggest bodies, on the pro bodybuilding circuit. Since winning the 1999 NPC Team Universe title, he’s won (or come a close second) on pretty much every competition out there, ranking first at the 2009, 2010 and 2016 Arnold Classic, and coming second place at the 2012, 2013, and 2014 Mr. Olympia competitions. These days, he’s as much known for his art and acting as for his muscles… although ultimately, it’s that incredible physique that feeds our interest the most. Learn more with these ten fast facts.

One of Greene’s biggest passions is art, with most of his work revolving around self-portraits which the bodybuilder uses as the inspiration to maintain his impressive physique. By August 2011, he’d build up enough pieces to host his own exhibition, at which Greene noted “As a bodybuilder, I am a master sculptor. The art show made me realize I’ve always been an artist: my medium is the human physique. My life is what I make of it, just like the art I’ve produced. This art show makes a statement. I’m celebrating some personal accomplishments and my own artistic expression.”

2. He’s branched out into acting

In 2015, Greene took on his first acting role as a male stripper on the comedy film College Debts. The experience clearly gave him a taste for entertainment, and a year later, the bodybuilder turned actor shot the martial arts film Crazy Fist at the Chinese province of Guizhou. In January 2017, Greene made it clear the acting bug had bitten hard after signing up with The Gersh Agency. He’s subsequently appeared on the Indian Kannada-language movie Pogaru, and as Funshine on the 2nd season of the Netflix sci-fi hit Stranger Things.

3. He’s hosted his own podcast

In November 2014, Greene took his thoughts to the nation on Generation Iron, a weekly podcast co-hosted by Greene and fitness model Krystal Lavenne. The two discussed the trials, tribulations, and roadblocks they’d encountered on their way to the top of their respective games, while also inviting questions from fans.

4. He had a difficult childhood

Greene has overcome countless obstacles on the way to the top, with his difficult childhood being one of the biggest. At the age of six-years-old, Greene’s problematic home environment led him to become a ward of the state. He spent the next 10 years flitting between countless foster homes and institutional facilities. Despite the challenges of his situation, Greene ultimately used it to his advantage, seeking refuge not on the streets as many of his peers did, but at the gym.

5. A teacher inspired him to get serious

Encouraged by his 7th-grade school teacher, Greene began to see the potential of his passion for bodybuilding and subsequently spent the majority of his years at middle school touring the country as part of the teen bodybuilding competition circuit. After numerous successes, Greene decided to take a break from touring to pack on some serious muscle and take things to the next level.

After spending several years honing his technique at 5th Avenue Gym, Greene re-emerged on the professional stage just before his 19th birthday, earning the distinction of becoming the world’s youngest professional bodybuilder. Although Greene achieved major success (including winning the heavyweight division and overall title at the Team Universe), the young bodybuilder was still not satisfied and took a further hiatus (this time for 5 years) to work on developing his physique still further.

In addition to appearing on our screens as an actor, Greene has also featured as himself as part of several documentaries. The first, the 2009 Mike Pulcinella directed docu-feature Overkill, followed Greene’s preparation for his appearance at the 2009 Olympia. A year later, Greene worked with Pulcinella again on Overkill’s sequel Redemption, which provided an insight into the training methods and philosophies the bodybuilder employed during the lead up to the 2010 Arnold Classic (an event Greene ended up winning for the 2nd year on the trot). He also features on Generation Iron (which details the lead up to the 2012 Mr. Olympia competition) and Generation Iron 2.

8. He’s all about the “mind-muscle” connection

Greene has spoken expansively during interviews about the “mind-muscle” connection, and about how the philosophy plays an integral role during his workouts. “The mind-muscle connection is the number one factor [to success],” he’s explained. “You develop it over time by posing your muscles, and by paying close attention to how they feel. Eventually, it gets to where your mind can read the feedback that your muscles are providing, and your muscles can react to the stimulus that your mind is providing. Practice posing between sets or anytime. Feel how your muscles are working throughout your sets. Eventually, your mind and muscles will speak the same language and communicate between themselves.”

Thanks to his incredible work ethic, Greene has put the poverty of his childhood well and truly behind him. Courtesy of his numerous competition wins (and the prize money that’s accompanied them), his acting gigs, book deals, Dynamik Muscle supplement brand, and sponsorships with Flex and Ryderwear, the hugely successful bodybuilder is now worth a cool $1 million.

10. He’s developed his own training program

In 2016. Greene took his training philosophies to the masses with his training program “The 5P” (which, in case of any doubt, stands for his motto “Proper Preparation Prevents Poor Performance”). Advertised alongside some inspirational messages about how the program has helped Greene develop into one of the most legendary bodybuilders the world has ever seen, the diet and exercise program is available as a 4, 8 or 12 week plan — although with the 12 week plan costing a hefty $650 USD, you’ll need to be seriously committed to go to the expense of signing up.