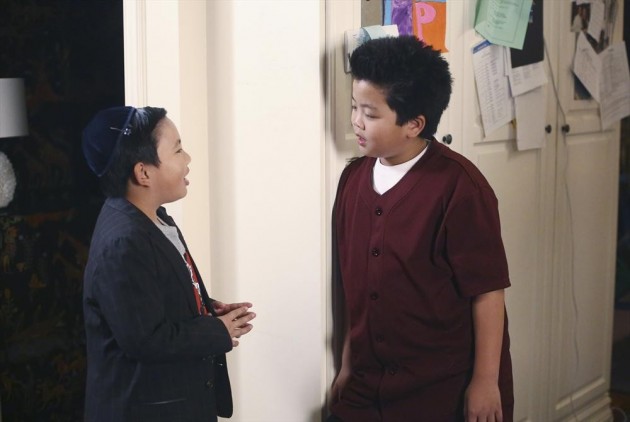 When we were kids, our parents always wanted us to play and hang out with the “good” kids and school administratorsÂ wanted to organize us according to levels of academic potential. “Socializing” sometimes could feel more like “groupilizing”: that is, we weren’t allowed to pick acquaintances or friends based on our common interests with other kids, but by other factors, like behavior, intelligence – or in many cases in larger schools, race, something that comes to the forefront in the less-PC ’90s-setting of Fresh Off The Boat. Despite its time setting, the truth remains universal: people will always try to box us in based on some pre-conceived definition – and it’s only when we free ourselves from that, that we can find true companionship in the world.

There’s nothing natural about the friendship fostered between Phillip and Eddie: Jessica thinks it’s a good idea because he’s a “good Chinese boy,” and the school principal just wants his ex-wife to see he’s open-minded (conveyed by hilarious cutaway of a candid photo of him with Eddie and Phillip). The two of them are drawn to each other initially, but that’s just a matter of being clumped together by race, their drastically different interests quickly establishing how little these two were going to like each other. Initially, the two enjoy the comfort of having someone “like them” around; but what does “like them” really mean if it’s only skin deep?

“Phillip Goldstein” doesn’t necessarily engage this central idea in complex fashion: Eddie’s a rap fan, and Phillip is the kind of kid Eddie thinks would be a nerd. But the universality of the story serves another purpose: it speaks to our nature as humans to seek out those similar to us in any way when we’re trying to assimilate to a new place, no matter how desperate we may seem. Eddie just wants someone to go to the Beastie Boys concert with, but can’t find another fan of the group to go with him (like his one classmate, who is ecstatic over learning the real name of L.L. Bean), so he agrees to go to a musical with Phillip before the concert in exchange, putting on a front for a friendship he wants nothing to do with. Even when we don’t like people, we can find ourselves seeking out their company: familiarity is extremely valuable to us as humans, and Eddie’s behavior is an extremely childlike (and therefore unsubtle), poignant display of how desperately we seek that out, even if we know we’re forcing it.

The episode finds great humor from the obvious differences between them, beginning with Phillip’s dedication to his Jewish faith, and continuing through Eddie’s desperate attempts to stay awake through Phillip’s half of the deal. “Phillip Goldstein” makes its titular character a breathing entity, a nice contrast with the broadly-painted white students we see in the beginning of the episode. But even Eddie finds himself pulled towards Phillip, some preconception that they’re two peas from the same pod because they’re Asian. In a way, Eddie is sterotyping himself, and “Phillip Goldstein” holds him to task as much as it does anyone else in the episode – without doing it at Phillip’s expense as a character, the most surprising (and pleasant) part of the whole affair.

Where the episode is strongest, however, is when it focuses on Jessica and the principal, and their attempts to force the two Asian kids at the school to assimilate together, two people whose vastly different motivations are united by this single, thin-headed notion of putting like with like, because that’s just whatÂ makes sense. Jessica wants Eddie to stop talking in slang (“WHY DO YOU WANT TO BE A LETTER?”), and wants him to become the Good, String Instrument Playing Chinese boy, just like his little brothers, driven just as much by personal motivation to shape Eddie as she is by her cultural heritage. However, it turns out that was a mistake, and Phillip is just a selfish jerk – a sudden turn of events (one the show doesn’t linger long on), but one that gives light to the message at the center of the show (which is if you tell your parents the rappers in the group are white, they might let you go to the concert – no, I’m kidding!), which is that in the end, we’ll end up with the people we should when we get out of our own way (like Eddie does with his fellow Beastie Boys fan, the only black kid in the school).

This principle (introduced by the principal; okay, I couldn’t help myself) is also reflected with Louis, who is isolated from the family for most of the episode, except when driving the family car or at dinner with the Goldsteins (where he remains awkward and hilarious). Where it manifests is his time alone at the restaurant, after he hires the exact person he thinks he needs as a greeter to replace the recently departed Mitch. Again, his assumption on what his greeter should be leads him to hire someone who he actually doesn’t connect with; in fact, the new guy steals Louis’s favorite part of the job, bringing people to their seats (and begging why he has Mitch in the first place). The entire structure is different, but the idea is the same “don’t judge a book by its cover” story, told in the distinct rhythms ofÂ Fresh‘s emerging voice.

That emerging voice is quickly turningÂ Fresh Off The BoatÂ into a fully-rounded family comedy – and even as the ratings for the show start to dip, it gives me hope that ABC sees what a strong comedy it has on its hands so that it will have a little faith in it. Episodes like “Phillip Goldstein” display exactly why:Â FreshÂ is a show that’s learning howÂ to be funny (both with its characters, and its ever-evolving approach to its racially-distinct premise), without feeling bitter, packed with cheap references, or, most importantly, dishonest.