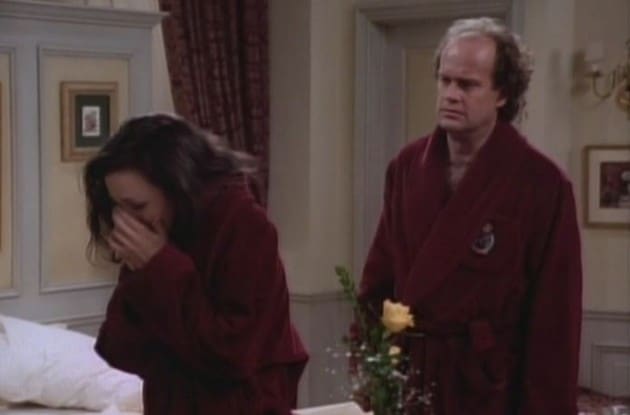 As a person who holds a special place in his heart for Frasier and Lilith, “The Show Where Lilith Comes Back” is a bit of a special episode to me. It’s not just the first crossover with Cheers or Lilith’s debut on Frasier; it’s the best of both of them, two hooks Frasier would use numerous times in the future, to lesser and lesser effect. And while “The Show Where Lilith Comes Back” isn’t a particularly memorable episode, it’s a surprisingly poignant one, a half hour that demonstrates the existential struggle of Frasier between the darker elements of the show it spun off from, and the slapstick sitcom it often wanted to be in its later years.

The opening scenes reflect this, particularly when Lilith arrives at Frasier’s house for dinner. Immediately, she becomes this caricature of evil personified, giving Daphne “psychic headaches” and throwing Niles into a tizzy when she constantly teases him about the vows Maris spoke to him at their wedding. She’s cruel, uncharacteristically monotone (even for her), and uptight in ways that Cheers‘ Lilith never was; through the prism of Frasier‘s Bizarro West Coast world, Lilith’s wonderful characterization on Cheers (save for that horrible last season story of her cheating on Frasier with a crazy botanist) is twisted into an amalgamation of the cheapest jokes leveled against her on Cheers, reducing her to a punch line Frasier can (metaphorically) beat on to make himself feel better.

Then “The Show Where Lilith Comes Back” takes a magnificent turn; Lilith mentions finding a letter Frasier wrote her while depressed in Boston, planning his trip to Seattle. His plea for their reconciliation fell behind the dresser, however, and Lilith didn’t pick it up until nearly a year later, when her own depression and fear about raising Frederick alone overwhelmed her. “It was like being thrown a life preserver,” she tells Frasier when he arrives at her hotel room later that evening; even though they’ve supposedly both moved onto their lives, the comfort of what once is always like an addiction. In our weakest moments, it’s where we’ll often try to run to, even if so much time has passed, that place is no longer left, those emotions no longer alive as they are preserved in memory.

After sleeping together, Frasier and Lilith both realize they’ve made a mistake and fallen victim to some of the most simple psychological pratfalls as the patients they have on opposite coasts of the States. And as they try to enjoy breakfast, they finally deal with the fears they’re living with today: Lilith with raising a child alone and facing the limits of her own inner strength, and Frasier trying to rebuild his life with his family. As great as their marriage once was, it is over – but their ability to be there for each other has never passed. True love is an odd thing like that; even when pain and circumstance come in the way of something special, the metaphysical bond created between two people always manages to exist in some little, significant way. And when we cross paths with those people in our lives, the rare times that we do, it often offers us a poignant mirror with which to view who we’ve become, the mind’s natural proclamation to attach itself to something known, especially in times of great turmoil in our lives.

How “Lilith Comes Back” captures this moment is haunting, with Frasier forcing Lilith to look in the mirror and remember what a a strong, independent woman she is. Their reconciliation, however brief it is presented in the final scenes of the episode, is a rare moment when the philosophies of Cheers snuck their way into its slapstick spin-off. Lilith and Frasier will never be happy together as a couple again, but they have a wonderful son and a world of possibilities ahead of them. The dichotomy between those two emotions is a particularly resonant one, and one Frasier would only occasionally grasp in meaningful ways. Future Lilith appearances wouldn’t be so lucky, but “The Show Where Lilith Comes Back” is a surprisingly effective bit of crossover/stunt casting, bringing a poignancy back to Frasier that recent episodes have sorely lacked with its powerful third act.

– After letting Lilith on the air, Frasier writes Roz a note and slams it up against her window: “You’re FIRED!” Roz responds with “I’m union!”

– Lilith tells Eddie to go away, and boy, does he listen.

– Lilith asks Marty if he experienced any repressed sexual urges while he was beating a perp who tried to stab him. Ahh, never change, Dr. Sternin.

– Lilith, why did you leave your hair down? “I wanted to be playful.”