Home
Movies
Five Movies to Watch if You Like National Treasure 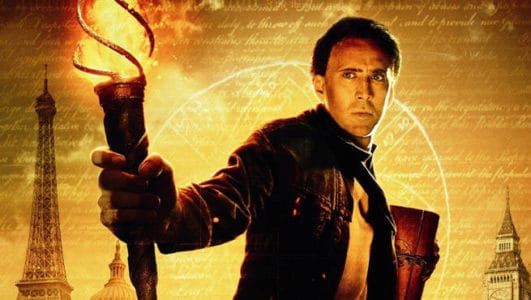 Watching any sort of treasure-hunting movie is usually a lot of fun since there’s plenty to see, plenty to expect, and a lot of history that can be utilized in many different ways. National Treasure took a lot of these elements and created a movie that obviously wasn’t historically sound but was still pretty exciting at the same time since it gives people a reason to go look at the old histories again just to confirm for themselves that there aren’t any hidden maps or treasure troves lying just within reach that we’re missing on a daily basis. The movie was entertaining but unfortunately if you can believe that the founding fathers left clues that aren’t any more difficult than those found in the movie then you might also believe that there is in fact a treasure that could dwarf pretty much dwarf the vast reserves that are said to reside in Fort Knox.

There’s usually a reason that anything comes with a warning label and a lot of it has to do with the fact that there are dire consequences that can and will occur once those warnings aren’t heeded. In this case though one can almost fully admit that had the explorers not decided to ignore the dire warnings of those that were trying to keep them away from the city of Hamunaptra they might have been better off. While a lot of us tend to not believe in the old legends and myths since we can’t really bring ourselves to believe in the existence of magic, there is usually a good deal of truth that starts such legends, and searching for it is bound to get a person nothing but dirty.

It does kind of help if the person going after a fabled ‘ship of death’ is someone that’s highly trained and tends to go searching for lost artifacts anyway since they already know what it’s like to risk their lives and those of others in the search for precious items. But this time was a little different for this particular crew since it had greater implications and eventually led to a massive cover-up that was happening right under the noses of those that could have stopped it. Of course the fact that the bad guys had the help of a corrupt local warlord didn’t help since his resources and vicious nature were bound to come into play at one point or another.

Ever notice how so many secrets are worth dying for in the movies, or killing for? In this movie religion plays into the theme in a big way since seeking the supposedly hidden message that Da Vinci apparently placed in his works drives a lot of the movie and has inspired a lot of people to continue driving the conspiracy theory ever since. The guy couldn’t have just been a genius, could he? It’s very true that some secret societies did exist back in the day that would gladly kill to keep their secrets and some still might in this day and age, but the moment they get put into a movie is the moment a lot of people start to think of them as more of a rumor than anything.

2. Raiders of the Lost Ark

As treasure-hunting movies go this one is a classic since it became part of a series that has kind of reached its limit as some people might think but is still great to watch over and over since some people tend to notice different things when they do. With that being said however it’s also easy to pick up on the effects and the outdated methods that were so great back in the day but also don’t make as much sense now considering that people can see through a lot of the smoke and mirrors that filmmakers use. Still, it was a lot of fun and did make a lot of people believe that the Ark was in fact something imbued with a great deal of power that could melt a person into a puddle of goo. Daniel Nasaw of BBC has more on this.

When a lot of us were kids this was one of THE ultimate treasure-hunting movies since a lot of us wanted to go on the same adventure and didn’t want to hear that it wasn’t real. The locations were very real, but the thought of being able to travel from Astoria to Cannon Beach and vice versa is real enough, but not in the span of time that the movie showed. It might have taken some of us a while to figure this out growing up, but those of us from the Pacific Northwest, particularly on the southwest coastline, figured it out pretty quickly. Still, it was and still is one of the best movies ever made.

And yes, it more than holds a candle to National Treasure.