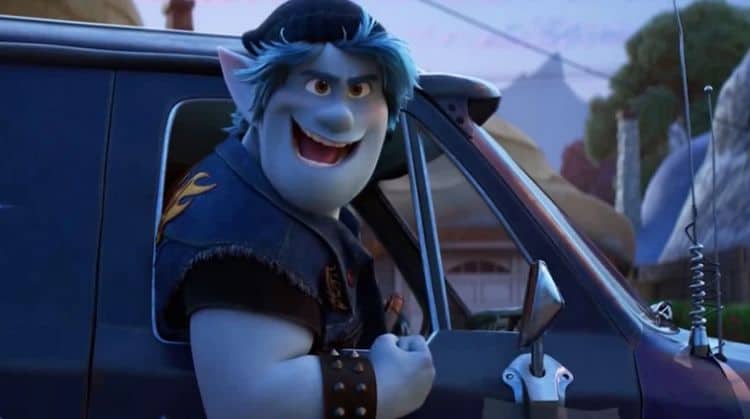 While Natalie Hunter of Screenrant and others might be willing to lambaste Disney and Pixar over a current lawsuit about the use of a van being used in the upcoming Onward movie. The movie, if anyone is paying attention, is about two elf brothers played by Tom Holland and Chris Pratt that are on a quest to find their father, who they never got to know when they were younger. But the main gist of this current confusion has to with a van that’s been dubbed the Vanicorn and its artist and owner, Cicely Daniher, suing both companies for copyright infringement when it comes to her idea and the use of her van in their promotional work. There’s just one problem: the image on the van in Onward is NOT the same as the image on Cicely’s van. Her artwork is amazing to be fair and it’s obvious that it took her a while and took a great deal of effort to make such a picture come to life in such a way, but if you look at the tweet provided by Natalie:

If you’re not noticing some very real differences in the appearance of the van then you might need to get your bias glasses checked since like many I would personally side with a small-time artist over a big corporation more often than not. But let’s compare. The Vanicorn that Cicely is standing next to has an image, and an impressive one at that, of a UNICORN on the side. The vans are similar of course, though the rear windows are different in shape and obviously the construction is definitely different. But the image on the van in Onward is that of a PEGASUS. Anyone with a working knowledge of mythology, or just anyone that’s a fantasy fan or even a D&D veteran would know the difference so it’s kind of hard to imagine how so many writers and artists are becoming incensed and think that she has anything even close to a case against Disney or Pixar. The images are different, the poses are different, and if we’re going to be sticklers about the lightning bolts and the stars in the image, even those are different since Cicely’s picture is set against a backdrop with a starry sky above, while the one in Onward has no backdrop, at least none that can be seen.

Now, if the van in the movie used Cicely’s as a base for what they would eventually create and entered into an agreement with her for likeness rights, it might be an issue. Except there’s really not that much likeness. Pegasus, unicorn, the two are both technically horses with fantastical qualities, but they’re still very different. Unless there’s a serious gripe that she has against the two companies for something they promised and didn’t deliver on this seems like a non-starter since it would be kind of like the creators of Bozo the Clown trying to sue just about any clown-based show or movie that’s come along since for likeness rights. Seriously, take a look at the two vans and really, REALLY try not to just take Cicely’s word that the likeness is spot on since to be real, it’s not. There are a lot of cases in which small-time artists have been ripped off in the past by bigger corporations that have approached said individuals when seeing their work and showing interest, but it’s also too likely that some artists see a chance to get a little more attention by claiming that their ideas have been ripped off by stating that what the corporate entities ended up using is just WAY too close to their work for comfort. In terms of this van though, no, not really.

I’m going to say it again for those that might have already let it slip from their mind, a pegasus is NOT a unicorn. The two fantastical and fictional creatures are very different despite the fact that they both have the base form of a horse. There have been instances when the two have been combined, but more often than not any fantasy fan will end up telling you that the two are not interchangeable since literature on the two creatures has been in existence for thousands of years and while it’s true, the lore has been mistaken at times as people have mixed the two up, there’s no possible way to do that with this image, so a lawsuit stating that Disney and Pixar messed up and used the ‘Vanicorn’ is about as solid as a cloud of vapor in a high wind. Daniel Goldblatt of The Wrap is another that might stand with Cicely, but it’s hard to tell. With all respect to Cicely, since she’s a talented artist and does great work, it’s time to brush up on her mythological creatures and go back to doing what she’s good at.