It’s time for the “Devil’s Night” celebration in Detroit, which is to say it’s the time where most people celebrate the Halloween season, while one man commits terrible murders and has now three years in a row in the days leading up to Halloween. Sounds like an interesting case, but would this episode of Criminal Minds trick or treat?

A killer in Detroit lies dormant all year, but kills on the days just before Halloween. He burns his victims to death in dirty abandoned factories, but they don’t believe he’s an arsonist. The fire is simply his weapon and he’s just as aggressive and destructive as the flames. 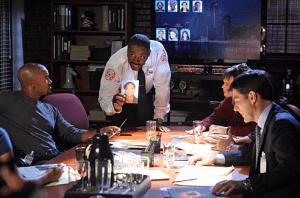 Rossi’s conversation with one of the victims wives (a rather unbelievable scene – I just didn’t feel it at all, especially considering the details which she was able to remember) reveals that the unsub may have serious burns on his face, which would explain why he only comes out around the holiday where scary faces and masks are common; he’s blending in.

They’re able to find out who he is, and they learn that he was in a car accident where he was badly burned. The episode showed promise early, but by the time it was over I thought it was quite average overall, though there was a certain sympathy felt for the man despite his heinous crimes.

My favorite part of the episode was the opening and closing scenes with Hotcher and his son Jack, who decides to dress up at his father for Halloween because he’s a real superhero and Spiderman isn’t. I’ve always loved Jack’s appearances on the show and this was one of his best, so kudos to the writers for bringing him back and giving him a nice holiday moment with his father.