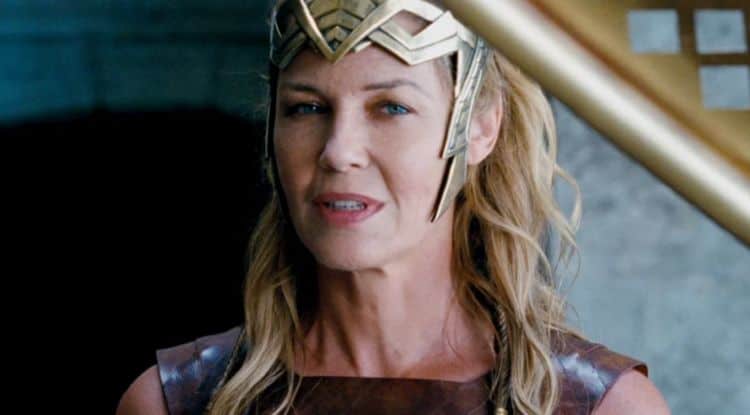 On one hand this could possibly work as it might serve to integrate the Amazons into the the rest of the DC universe, except for the fact that DC isn’t doing that kind of thing right now given how badly they’ve been crashing and burning with the DCEU. Taking a spinoff of the Amazons however and integrating them into the world beyond might be kind of interesting, but it also makes a person wonder just how long Connie Nielsen is going to be able to keep up the role of Hippolyta if the rumor that Tony Sokol of Screenrant and many others are talking about states that the movie wouldn’t be making its way to production until after a third Wonder Woman movie, which will be a while in coming obviously since there’s no word yet on just when the pandemic will be over and people will be able to go back to work. The de-aging technology that’s available has already shown that it’s not quite as up to snuff when it comes to making a person look that much younger, but then again if the story is set in the current day it might actually be alright since the Amazons do age eventually, right? It could even be that outside of their protective barrier that rests around Themyscira the Amazons might be stripped of a little bit of what makes them special. That’s really up to the writers and the director to determine, but the idea of having them all be immortal is kind of hard to imagine no matter that they were basically constructs that were given life by the gods. They can die obviously, but it’s just as obvious that they’re much harder to kill unless they’re putting themselves in harms way. And Diana could be an entirely different case given who breathed life into her.

But a movie focusing on the Amazons could be interesting so long as it’s given the right storyteller at the helm, and Patty Jenkins is obviously the right person for this job since she’s already shown that she can take Wonder Woman in a direction that’s not entirely pro-feminist but isn’t scared to show that women are equal and in some ways superior to men, particularly when they’ve trained for war for so long and are quite honestly bred for it. The only thing about this is that there would need to be a seriously tough antagonist for this movie, or an army of them perhaps, that are not Steppenwolf or his minions, since we’ve seen that and it’s also been seen that the Amazons, tough as they are, can’t stand up against such an enemy. Who would fill that role though is kind of hard to say since as tough as the heroes in DC are, the villains have to be every bit as tough, intelligent, and skilled in ways that go well beyond the norm. In fact it does feel safe to say that this is one of DC’s many problems, that their heroes and their villains are so ridiculously over-powered that they absolutely have to be over the top on a regular basis just to be able to cancel each other out. Otherwise there are few, if any, real weaknesses to exploit with each character, and the moment a writer puts one in it’s kind of viewed as a ‘whoopsie’ since it should have been apparent well before but is just now being exposed for….reasons.

The Amazons are a bit different since they’re insanely tough, strong, quick, skilled, and extremely impressive, but as was showed in Wonder Woman they are also very vulnerable to damage and can be killed. In other words, a well-trained army could possibly give them a serious run for their money since with guns and tactics arrayed against them the Amazons might be in a spot of trouble. Or if an army with some type of power granted to each individual and a full array of fighting skills was aligned against them it might be that they’d have to fall back on various other tactics to carry the day. In other words, the Amazons aren’t perfect no matter how much they train or how strong they become since they’re not bulletproof and they’re not indestructible. So this movie could work largely because there would be a very real danger to the group, whereas in Wonder Woman there wasn’t much sense of danger since she was basically untouchable throughout much of the movie because she was too fast, too strong, and somehow bested a full-blooded god whose entire existence had to do with warfare, but was obviously too arrogant to just crush her and be done with it. That’s a pretty common failing in a lot of stories that doesn’t always feel real enough since in real life, the bad guys tend to just do the deed and get it done with, minus the gloating.