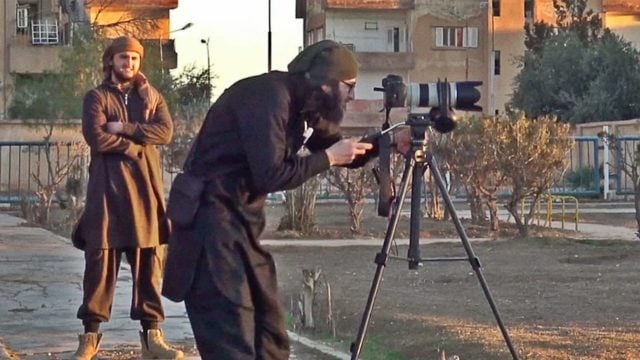 City of Ghosts is an American documentary by Matthew Heineman, who is best-known for Escape Fire in 2012 and Cartel Land in 2015. Like its name suggests, City of Ghosts focuses on a group of Syrian citizen journalists called Raqqa Is Being Slaughtered Silently, which is a reference to the city of Raqqa that has been held by ISIL since 2014.

What Is Raqqa Is Being Slaughtered Silently?

To understand Raqqa Is Being Slaughtered Silently, it is important to understand something of the Syrian Civil War in the region. In brief, Raqqa was not considered by President Bashar Al-Assad’s regime to be under serious threat from the rebels at the start, both because its anti-Assad element had remained peaceful and because of the more than 500,000 refugees who had fled there from the fighting in other cities such as Aleppo, Homs, and Idlib. However, this had changed by 2013, which was when the Syrian rebels in northern Syria decided that it was time to seize a Syrian provincial capital. By March 5 of 2013, the Al-Nusra Front and other rebel forces had overrun the Syrian Army positions in the city, and by January 14 of 2014, ISIL had seized complete control by ousting the other rebel forces.

Unsurprisingly, ISIL’s control of Raqqa has been brutal. For example, it executed Alawites as well as other suspected supporters of Assad’s regime en masse. Furthermore, it destroyed both the Shia mosques and the Christian churches in the city. Finally, it has instituted draconian controls over the daily lives of the residents, with an excellent example being how said individuals cannot access the Internet save in Internet cafes where they are monitored by ISIL fighters.

It would be an understatement to say that what Raqqa Is Being Slaughtered Silently is doing is dangerous. So far, members of the group have been caught and executed inside the city. Furthermore, other members of the group have been assassinated not just in the rest of Syria but also in places outside of Syria. As a result, their determination to continue in spite of the ever-lurking dangers is nothing short of remarkable, with the result that they have provided the outside world with information about a number of news stories that could have come from nowhere else.

Why Is This So Important?

There are a number of reasons why people might consider City of Ghosts to be important. For example, some people might find it inspiring how normal people are so willing to tell the truth in spite of the risks for themselves, while other people might find it informational about a conflict that is much-discussed but not well-understood as a rule over in the west. However, City of Ghosts is also a searing reminder of what is happening over in Syria in this precise moment, which is important when year after year of horrific news from the region has dulled the emotional impact of the Syrian Civil War for much of the outside world.