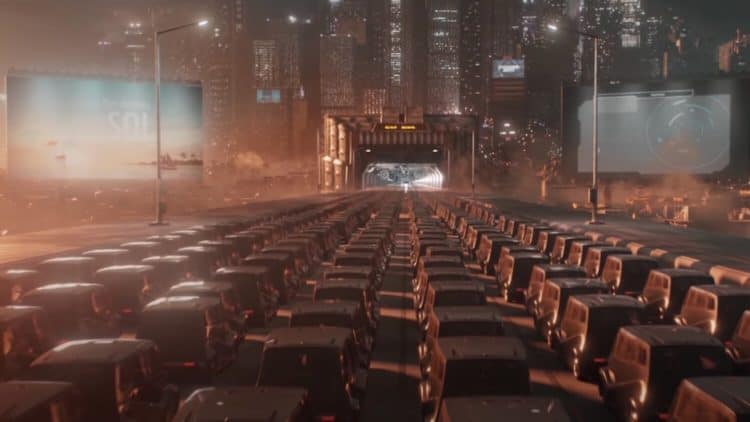 Population control is definitely a creepy and very controversial thing since trying to cut back on the number of people is also bound to be the same as telling people they simply can’t reproduce because the world is too crowded. But taking care of the population control in this method is absolutely diabolical since it appears to have normalized the random and indiscriminate killing of people to keep the population under control and to ensure that people aren’t systematically killed off due to race, socioeconomic status, or any other factor that might be used to randomly euthanize people. From the start, this short film is pretty depressing since it shows little more than a line of futuristic cars moving toward a tunnel in the distance and it has a sense of foreboding to it since the parents in the car have a very beaten and drawn look to them that indicates that life hasn’t been entirely kind. The kids appear well-adjusted, at least enough that they’re not entirely neurotic and could possibly have mental issues later on in life. But then the movie keeps rolling and the tunnel closes for the first time that the viewer can see, and it becomes clear that people have accepted this fate because there’s no other way to go. There are no off-ramps, no deviations in the road, and the only other way off this particular track is to jump the barrier and let fate take over.

This is without a doubt a dystopian world where people have either given up or those in charge have clamped down so tightly that there’s little if any room to wiggle out of the current oppressed state. Whether you want to believe it or not, this is what a lot of people feel might happen in the future to come since the overpopulation issue that the earth is currently experiencing isn’t really getting any better and the death rate has apparently not been great enough to even things out. One might scoff at that in the wake of the coronavirus, especially since hundreds of thousands of people have passed in the last few years due to one thing or another. But when a person looks at it, the passing of hundreds of thousands is next to nothing when there are billions of people in the world and very limited space for everyone. The arguments that go into this idea are plentiful, but I won’t be going into them here since it would take a while, and focusing on the clip above is a bigger priority. The hopelessness of this story is something that can’t help but be noticed since despite the kids and their ability to simply exist at the moment, the adults know better and they know that being stuck in the tunnel means extermination since this is the purpose. Imagine if such a thing was in place now what people would say. It’d be one of the most horrific ideas that anyone could ever come up with for population control since it would nearly erase the idea of morality when speaking of government and nearly abolish any faith that a person had that their government was looking out for them.

The fact that the adults know to fear this and the kids are either accepting or know very little isn’t too surprising since a lot of people would gladly choose to keep such knowledge from their kids since to invite such horrors to a young mind is a torture of the worst sort, even if it happens quite frequently in the world as we know it now. The son is no doubt aware of what happened to the young girl he met during the brief trip, though he obviously knows better than to ask as the family continues to make their way home to whatever existence they eke out and whatever life they’re allowed to live. This type of future is something that many people would gladly rail against since it doesn’t denote freedom or even a healthy sense of right and wrong. Instead, it shows something that treats people like cattle, to be disposed of when chosen at random for extermination simply because the problem of overpopulation hasn’t been given a solution yet. It’s a problem to be certain, but people treating one another like human beings is another problem that many movies have brought up in the past and would be wise to find a solution for, barring the idea of a utopia where everyone is happy. That’s the conundrum, isn’t it? We need space for added people, but we want everyone to be happy. In the process, we need space, time, understanding, and above all, the capacity to treat every life with the respect and dignity it deserves. Otherwise, we become expendable faces in the crowd.