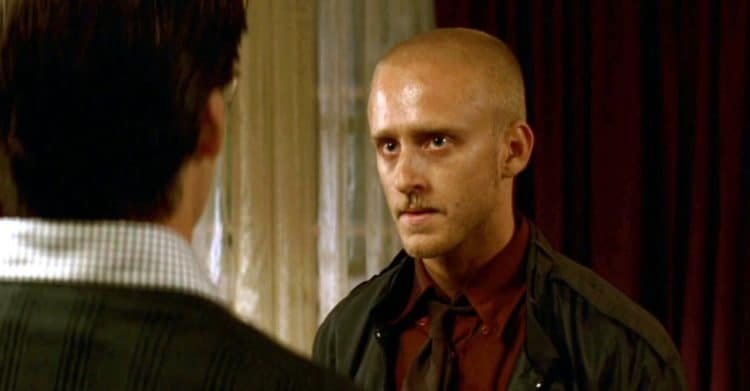 Ben Foster is a curious actor in a way since he can look absolutely pitiful, he can seem dangerous, and then he can seem like your best friend if he’s cast in the proper light. In a way he and Aaron Paul have a very similar look despite being distinctive from one another. It’s that weasel-like look that they can both affect that grants them an air of uneasy danger and a possibility of violence. Yet for all that Ben can definitely act the part and then flip it around and seem like a completely different person. That’s a big part of his charm really, the fact that he can act like he belongs in pretty much any movie that he’s put into, without a doubt and without having to look twice at him. It is easier sometimes to see him in the type of rat-faced role that makes him seem like little more than a smaller and more desperate character, but when he plays the good guy he definitely transforms in a big way.

Michael and Eric Cummings of Slate get into just how much fact and fiction there is in this movie since it’s based off of a real story. There’s definitely a need to tell the story, but there’s also a desire by many people on both sides of the coin to see an accurate but entertaining bit detailing the lives of the four servicemen the story is about. The odds they faced were insane enough that most people would look at the situation and say absolutely not, but then one doesn’t get into the Marines to look the other way and run when things get too hard. Those that take on this responsibility for their country are typically those that run into the danger, not away from it.

This is one of those times in life when life takes too much and some folks are willing to take back enough to make it right. Toby and Tanner have thought their robberies out fairly well and don’t seem to have much of an issue with them, until Tanner starts taking too many unnecessary risks and starts jeopardizing the entire operation. When Hamilton is onto them and finally ends up killing Tanner after his partner’s death he confronts Toby at the end, telling him that he knows Toby masterminded the entire robbery even if he can’t prove it. The movie is left on a note indicating that Toby and Hamilton might settle up one day.

Bryan Alexander of USA Today is probably right in saying that a lot of people don’t remember the earlier version with Charles Bronson, but this remake tends to follow the story quite a bit since it seems to insist upon improving or deviating only in certain areas when it seems needed. Also, there’s the idea of upgrading that was absolutely needed considering the vast difference in technology between Bronson’s era and Statham’s. It’s fair to say that the original movie was every bit as impressive as the one we were given this time around. Plus the same twist at the end was a nice touch since it wouldn’t do for the protege to get away without some form of consequence.

A lot of people might not know that this movie was based on real-life events, though the names were changed obviously if you take a look at the history. The idea that someone would kidnap the brother of the person that owed them money however is beyond insane since not only is kidnapping a crime that people can’t come back from, it’s something that’s bound to end in tragedy eventually from the statistics that have been taken throughout the years. The kidnappers can’t always rely on the kidnapped individual not saying anything, even if they’re extremely careful. Such a situation is bad news for everyone involved.

He didn’t have a huge part in this movie, but it was important enough that he was noticeable and was able to truly freak people out since he seemed like a shell of a person that had no business being in Barrow and was unknown to anyone save those whose coming he heralded. In a way it almost seems as though he was sent out by the vampires to stir the town up, to get them thinking, and to unnerve them just a little, and it worked. The confrontation in the diner was one of his best scenes ever since it showed the kind of manic behavior that he’s so capable of on screen, and it showed that the character felt he had nothing to lose since he was ready to go toe to toe with a man nearly twice his size.

Ben Foster is a gem that hopefully sticks around for a while.