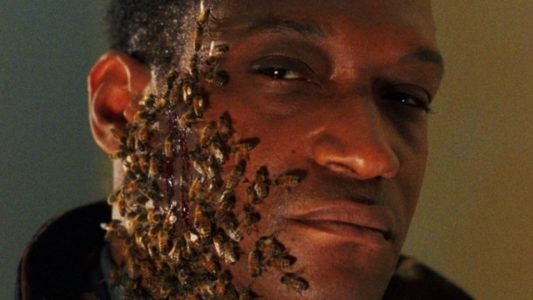 Whether on-screen or as a voice actor, it’s hard to not be appreciative of Tony Todd since his voice is downright creepy and perfect for pretty much everything he’s done. To be certain, he hasn’t taken on as many voice roles as he has live-action, but what he has done is impressive enough that one can be glad that someone had the presence of mind to look him up. Something about this guy’s voice is absolutely haunting, and between the Candyman movies and the Final Destination series, he easily became one of the more popular figures in pop culture since between his voice and his presence one couldn’t help but feel a shiver every time he spoke. Plenty of people are bound to remember him more for his live-action performances since he’s one of those individuals that has been filling a niche that a lot of people happen to enjoy for many years as the guy with the deep, terrifying voice and the larger than life presence whenever he’s on the screen. But some of that does manage to carry through into his voice roles thankfully.

He did play the Fallen in Transformers: Revenge of the Fallen. A lot of people criticized this movie pretty heavily and for good reason since it did kind of fall short of the first movie and it did introduce a character that a lot of people weren’t really that excited to see given that Megatron and a few other villains were thought to be the worst of the worst. But while the Fallen kind of left people wanting, his voice was on point thanks to Todd since it was downright creepy and made one think that the character was going to seriously rock the Autobots when he arrived on earth. Obviously that wasn’t meant to be since the moment Optimus Prime was revived he became so jacked that he took on Megatron, Starscream, and the Fallen all at once and ended up killing the Fallen while Megatron and Starscream predictably ran away.

Another great character that Todd has voiced is that of Darkseid from DC comics. He’s voiced this character a few times for movies that went straight to DVD, but it might have been great to hear his voice coming out of the Darkseid that was present for the Snyder Cut, though obviously, that didn’t happen. Todd’s voice is impressive enough that some people just get a rise out of hearing him speak since the power behind his words tends to be enough to scare some folks and impress others to no end. There are quite a few voice actors currently working in show business and a lot of them deserve a great deal of credit for what they do since the contributions that are made through voice work are just as important as live-action roles since people tend to react to the voices of various characters as they do to the physical representation they’re given. There are times when one has to wonder why in the world an actor was picked for a certain role when it doesn’t appear to fit them in the least, but Todd is one of those that have been cast perfectly into several roles, both live-action, and voice, and has given every bit of himself to make them work.

It feels fair to say that since he’s now in his 60s that he might be winding down just a bit since age does tend to take a little something from each of us as the year’s pass. But the power that’s heard in his voice is still there since each time he talks it’s evident that as he gets older it might fade a bit, but it won’t ever go away entirely. It’s interesting to think of what other voice roles he could take on in the years to come if he’s so inclined since to date there isn’t a lot that he hasn’t been able to accomplish when he’s set his mind to it. The fact that the deep, menacing voice that he uses for the movies and on TV is mostly his own with a bit of drama thrown in to make it even more impressive is amazing really. Some folks are born with naturally deep voices while others are not, and yes, it’s obvious that he likely didn’t have this deep voice as a kid, but the fact that his voice developed this way is very intriguing.

Admit it, if you’ve seen the original Candyman then you were either scared to death of Todd’s voice or you absolutely fell in love with it no matter how creepy it could be over the years. The guy just has to talk in a movie and it’s enough to send shudders down the spine, so when he’s in it to frighten people, you know it’s about to get good.