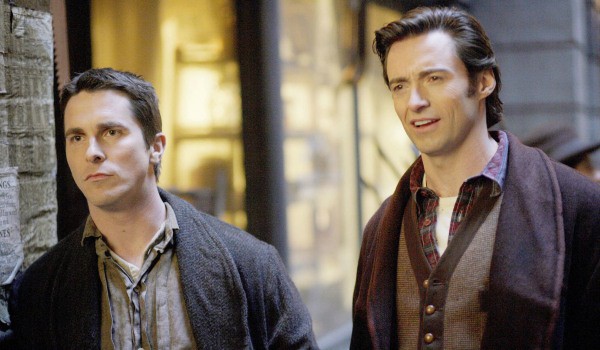 The Prestige is one of those films where you really have to be paying attention to know what’s going on at any given moment. You also get the feeling near the end that you should have known a few things all along and can rightly slap your hand to your forehead when you realize just how simple it was and how distracted you were by everything else. That’s okay though, this is part of what makes a good movie and despite the fact that the film’s fame didn’t last all that long it’s still an intriguing and powerful movie that’s worth watching.

But how much attention were you really paying to it?

10. Hugh Jackman puts on the same vest twice in the same scene.

During the scene in which Angier, Cutter, and Borden are speaking of which knot to tie up Angier’s wife with in the act, Angier puts on the same brown vest twice in a row.

9. One of the costars trained Hugh Jackman and Christian Bale the sleight of hand technique.

A costar that plays a magician in the movie is the one that taught both Bale and Jackman the interesting technique known as sleight of hand.

Tesla was a great inventor, engineer, and a bit of an eccentric. The part was given to David Bowie and he nailed without any real issue.

7. The author insisted on Christopher Nolan directing the movie.

Another director was interested in taking on the movie but the author of the original story desperately wanted Nolan to work with it since he was impressed by Nolan’s previous works.

6. Both female leads starred in the Iron Man sequel after the film.

Whether it was by happy accident or by design both women were seen in the Iron Man sequel, though only Johansson went on to become well known for her part.

5. Bale’s nickname of the professor was the stage name of another noted magician.

Taking on the name of The Professor could have been an homage to another famed magician that had been using that stage name for years.

4. Borden’s daughter is played by one of Nolan’s children.

You get the feeling that a blonde-haired little girl was kind of an odd choice to put in as the daughter of two people who were obvious brunettes.

The actress playing Sarah was mortified not long after this line was uttered as she felt certain that she might have ruined the surprise for the audience, but it was kept in anyway.

2. The main characters’ initials spell Abbra, as in abbracadabbra, a commonly used word with many magicians.

This is one of those hidden, quirky facts that you might have noticed if you’d watched the film a few times.

1. Angier’s double is quoting Shakespeare when he is about to go into his audition.

Given the seriousness and gravity of the movie it seems that a little Shakespeare would be warranted now and again.

So, were you paying attention?