Home
Movies
10 of the Most Memorable Swashbuckling Movie Pirates 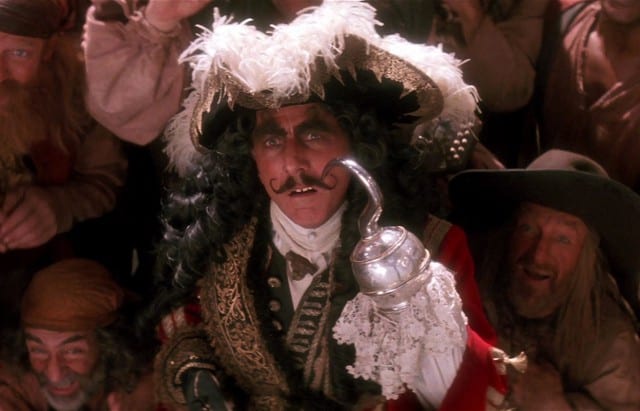 We’re used to seeing pirates portrayed as having a peg leg, an eye patch, and parrots on their shoulders. Thus, it’s a bit surprising to see an emaciated Somalian boy referred to as a “pirate” even though that’s often what a modern pirate might in fact look like.  With the recent news about pirates, I started thinking about pirates in movies, where they are stereotyped for the audience’s liking.  Take a look at 10 of the most memorable swashbucklers from the big screen.  Note: one pirate per movie/series! Arrrrrrrr!!!! Scurvyyyy!!!!! OK, I’ll stop. 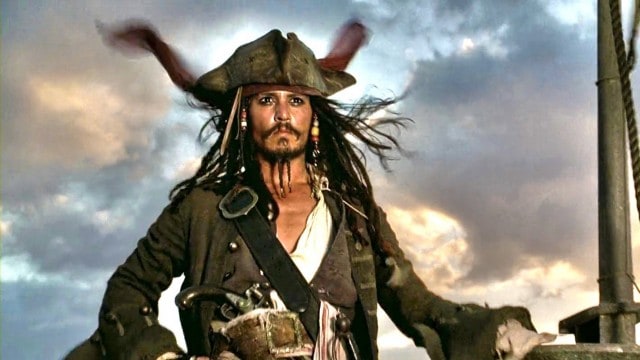 Immortalized by Johnny Depp, Captain Jack Sparrow is memorable from his very first appearance in the first Pirates of the Carribbean movie. He’s crafty and resourceful, and comes off as (a not sober) Keith Richards with a dash of Steven Tyler and sprinkles of a homeless person. Still, he’s cool enough to flirt with Keira Knightly and can get away with wearing eye shadow. As bad as the sequels were – and they were effing BAD – Jack Sparrow was still worth watching. 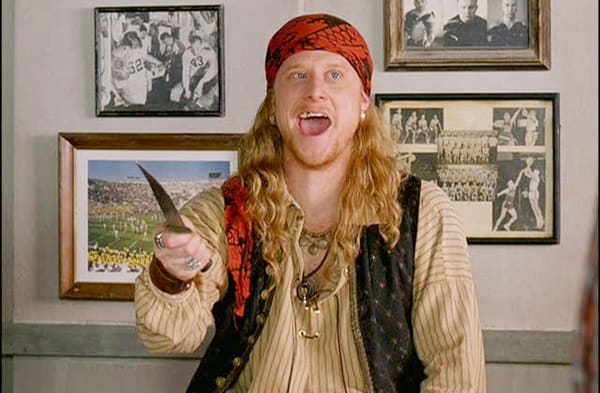 Even though he didn’t have a pirate ship or a peg leg, Steve the Pirate could “Arrrr!” with the best of them. It was a shame that he lost his pirate getup at the end of Dodgeball; it must have been a real treat for his fellow gym members to bench press next to a pirate doing preacher curls. Alan Tudyk is a great actor and impossible not to like in Firefly and Serenity. 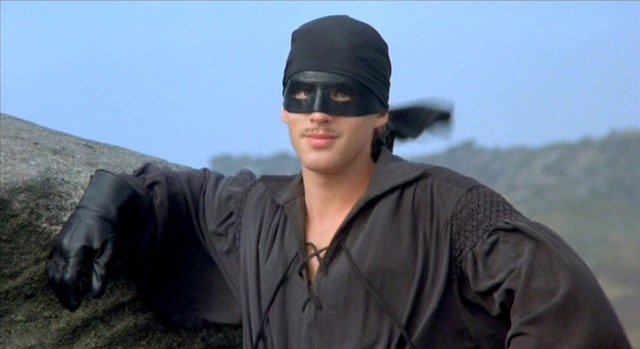 Princess Buttercup believes that her love, Wesley, was attacked and killed by the Dread Pirate Roberts, and so she agrees to marry Prince Humperdinck. Wesley was not killed, however, after telling Roberts about his love for Buttercup. Roberts was so impressed that he made Wesley his apprentice and eventually passed to Wesley his name and rank of captain. Wesley, it should be noted, is just filthy with a sword.

Played by Frank Langella, Dawg is the evil uncle of female pirate Morgan Adams. They both seek to find three pieces of a treasure map that leads to treasue on…Cutthroat Island. If this sounds stupid, it’s because it is: the movie was a ginormous flop. Still, Langella rules. The guy has played Skeletor, Nixon, and a pirate.

With apologies to Jack Sparrow, Captain Hook is perhaps the most memorable pirate of all time. He loathes the boy who won’t grow up, Peter Pan, and generally terrorizes the citizens of Neverland. The hook that has replaced the Captain’s hand and surely formed the Captain’s moniker was bitten off by a crocodile. Sure, there are saltwater crocodiles, but wouldn’t a shark have made a bit more sense? 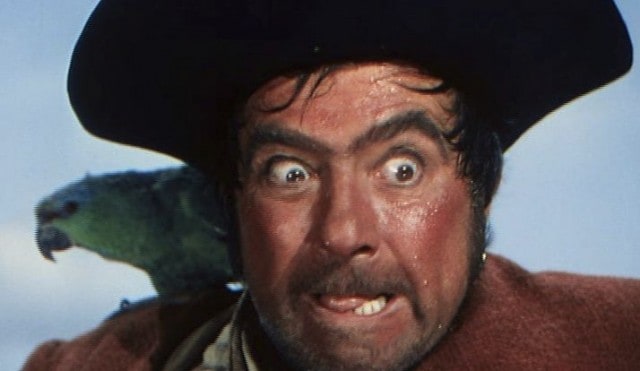 It’s kind of sad that Long John Silver is a legendary character born from the genius of Robert Lewis Stevenson, and whenever I see his name, I don’t think “Treasure Island.” I think about seafood. 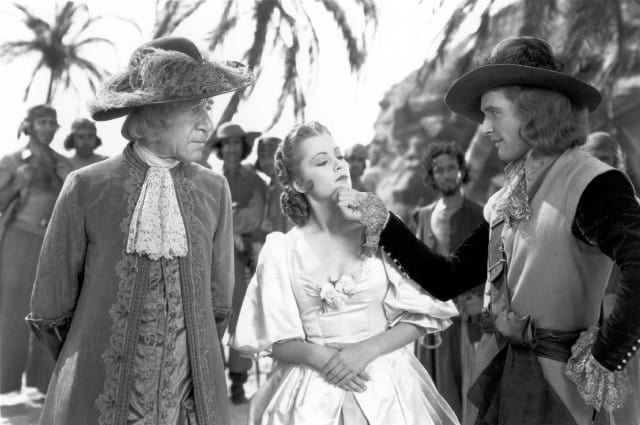 Made in 1935, Captain Blood is the story of Dr. Peter Blood, a man convicted of treason and sentenced to slavery in Port Royal. During a raid on Port Royal, Blood steals a Spanish ship and decides, “Hey, I’m an escaped slave and I just stole a ship, so I guess there’s really just one course for me…piracy!”   What’s great about this film is that it’s 1935.  We’re talking way back here and they were portraying pirates quite well.  While it might be tough for some of you to even fathom watching a movie from the 30s you’ll be pleasantly surprised.  Give it a try matey! 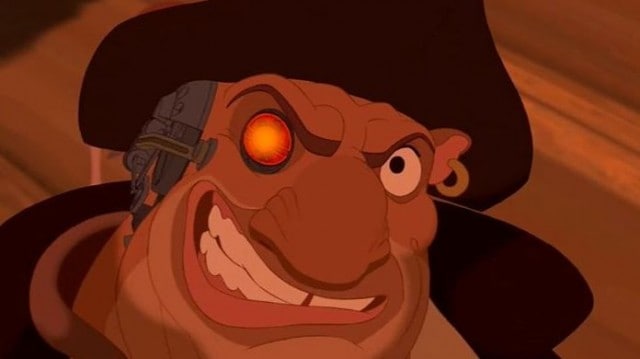 There are a couple of things that make John Silver a particularly unique pirate. The first is that he serves as a father figure to young Jim, the protagonist of Treasure Planet. The second is that he is a cyborg.  There’s just no teaching that one.  Wow. 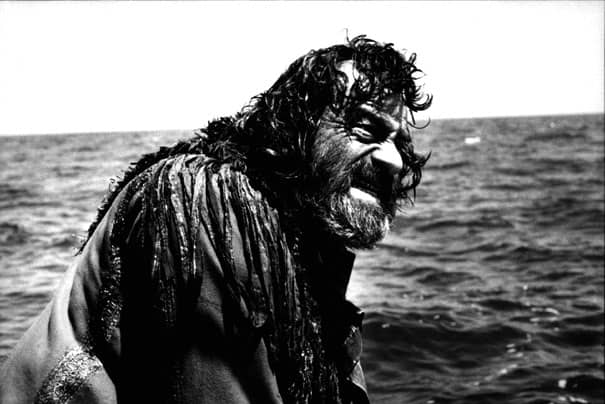 Played by Walter Matthau, Captain Red finds himself stranded on a raft with his first mate at the beginning of Roman Polanski’s “Pirates.” Before being picked up a Spanish ship, Captain Red tries to eat Frog. The two mates form a mutiny on the Spanish ship, but by the movie’s end, find themselves in the same situation – stranded, with Captain Red thinking about eating his buddy. 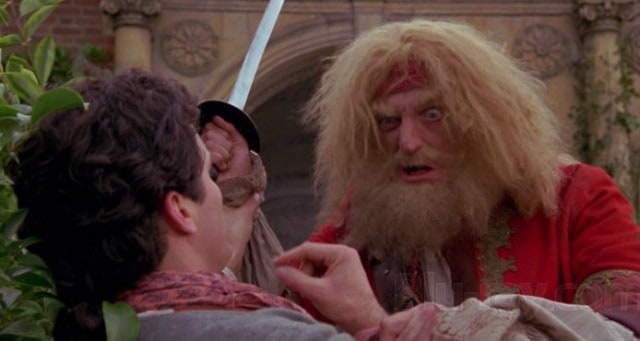 “Yellowbeard” doesn’t have the same menacing sound that “Blackbeard” and “Redbeard” do, which is part of the reason why this movie works so well as a comedy. I mean, whoever heard of a pirate being tried for tax evasion? Graham Chapman of Monty Python fame played Yellowbeard.