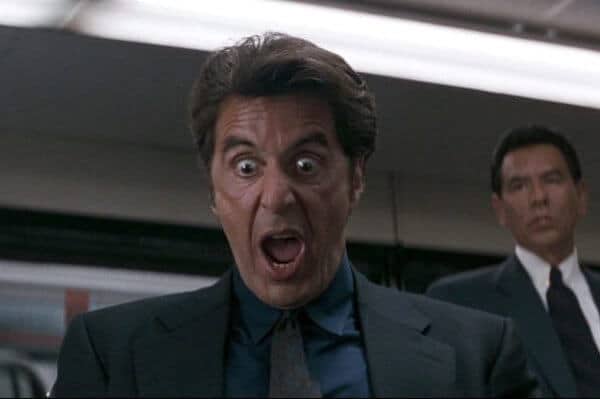 Here we go again with the yelling game featuring AL PACINO FOLKS! Yeah, that’s about how it feels when Pacino gets rolling, you get the nice guy, the quiet guy, and then he SHOUTS and you feel like you just verbally pimp-slapped by the sound of his voice. That’s the quiet before the immediate storm, the sudden buildup into something that there’s no preparation for and no defense against that hits you square in the face and makes no apologies before bowling you over where you sit or stand. Pacino has honed this ability throughout so many years of acting that he can hit without even thinking about it and leave you wondering what in the heck just happened. Sometimes he doesn’t need to do this, but other times, whoa.

In this movie it’s safe to say that you’d be better off being on the other side of the room when he finally gets going just because his voice modulation seems so out of control that even he doesn’t know when that brutal yell is about to come. But when it does happen along he’s more than ready to embrace it like a man riding a hurricane all the way to it’s end.

I’M A FAN OF MAN! The greatest trick the devil had was supposedly to make man think that he didn’t exist. Honestly I think the biggest and greatest trick in the devil’s arsenal could possibly be the ability to make others believe that he exists, but that God is in some way nothing more than an absentee landlord that created something and left it to it’s own designs.

Michael Corleone is usually a very quiet and composed guy. He doesn’t raise his voice a lot, he doesn’t get violent, but man when he gets worked up his voice comes out like a whip crack and the guys under his authority step to like well-heeled soldiers as they do whatever it takes to keep him and his family safe and to make sure that they do exactly as he says.

SAY HELLO TO MY LITTLE FRIEND!! Fess up, how many times have you said this in your life? The iconic saying has been repeated over and over throughout the years since the film’s release and has almost always been done in a cheesy accent that makes it just a little bit ridiculous. But it’s one Pacino’s greatest scenes ever in a movie and is easily one of the best yelling scenes.

Frank Slade is not a man you cross or talk down to. He might be blind but he’s not stupid and he’s not scared to speak his mind no matter where he’s at. If he happened to be the keynote speaker at this school you could imagine the boys and young men would be getting an earful of how life is really like and their young, impressionable minds would never be the same again. In some ways they might be better off for it.

Whew.  That Yelling Game takes a lot of energy.