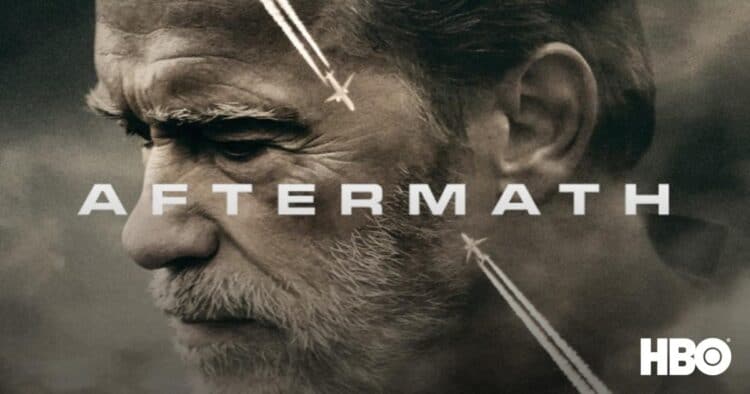 It’s not exactly common to see Arnold Schwarzenegger in a movie like this but it does make a bit of sense considering that he’s no longer quite as believable as the action star he’s been for so long, and because it does stretch his acting abilities a bit, which is usually a good thing no matter the outcome. But it might be that a lot of people would balk at watching this movie, to begin with since, even though Arnold has grown as an actor over the years, it’s still not what people might expect. Many Schwarzenegger fans are fully ready to see him tearing into people like Conan or blowing them to pieces as he’s done in more than a few movies throughout the length of his career. Playing the role of Roman Melnyck, Arnold is portrayed as a successful individual who works in construction and is well-liked by his coworkers and his boss. The understanding is that he has a good life and a loving family, as he leaves work early, at the behest of his boss no less, to ready his home for the arrival of his wife and daughter as they return from New York.

Upon reaching the airport, however, Roman is informed that the flight his wife and daughter were on has crashed and that there were no known survivors. Understandably distraught and unable to function, Roman returns home, and in his devastation blames the air traffic controller for the disaster. The movie then switches to the tale of Jake Bonanos, the air traffic controller that was deemed responsible for the disaster. On the day of the accident, Jake was forced to man the tower by himself when his partner went to take a break, and it quickly becomes obvious that this job can’t be manned by one person, especially with the phone lines down for maintenance.

Jake does what he can to keep each plane in the sky from any mishap, but when two flights begin to converge along paths that will bring them into line with each other for a mid-air collision, the loss of the phone lines makes it impossible to get a hold of anyone, and switching headsets back and forth to call out the position of each aircraft and guide them safely to one runway or another proves to be too much as Jake watches two flights disappear as they collide, leaving him speechless in the process. Following the collision, Jake is absolved of blame but begins to fall apart as his home life starts to fade and his general state of mind declines, leaving his wife to state that his mental state is affecting them, and that it’s not for their child to be subjected to such a thing. Upon seeing the outside of Jake’s home, which is covered in graffiti that labels him as a killer and a criminal, it becomes a little more obvious what he’s been going through. As the story returns to Roman it’s easy to see that he hasn’t moved on yet, and he’s even taken to sleeping at the cemetery near the graves of his wife and daughter. When he’s kicked out by the caretaker it’s made clear that he’s been doing this for a bit following the funeral.

When a journalist comes along to inquire whether or not Roman is interested in helping her with information to write a book on the crash, she leaves her card so that he can contact her later. Jake moves to another city, gets a different job, and even assumes a different name as he was instructed to start over again and have a life that does eventually reconnect him to his family. Unfortunately, Roman, still driven by grief, speaks with the journalist and obtains Jake’s new name, but has to track him down as the journalist won’t give him everything. All the same, Roman tracks Jake down and demands the apology that no one has seen fit to give him following the accident. When Jake responds angrily and attempts to push Roman away, the older man reacts by stabbing Jake in the body and then in the neck, killing him as Roman tries to calm Jake’s wife and son down, as they walk into the room not long after Jake has been fatally stabbed.

Roman then spends ten years in prison before being let out. Once he is released he finds himself walking from the cemetery one day only to encounter the son of the man that he killed. The son pulls a gun on Roman, threatening to kill him for his father’s death. When Roman apologizes, the son relents, and Roman is allowed to walk away, albeit with the knowledge that he’ll live with this guilt for the rest of his life. As mentioned above, this isn’t the typical Schwarzenegger movie, but it is worth watching at least once.