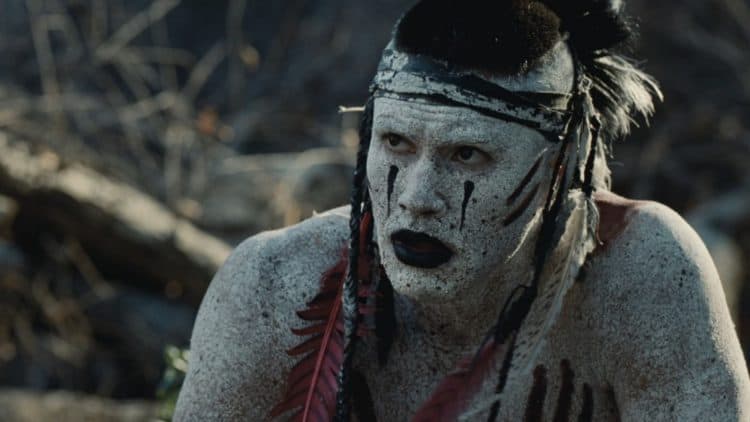 The phrase ‘slow and steady wins the race’ is a great way to describe the trajectory of Martin Sensmeier’s career. Since making his first TV appearance in 2014, he has been slowly working his way towards bigger and better opportunities. In the last couple of years, those opportunities have come. After recurring roles in Yellowstone and West World, Martin was cast in a main role in the 2020 mini-series The Liberator. Now he is getting ready to take his talents to the big screen with roles in upcoming films like The Chickasaw Rancher and The Things They Carried. With the way things are going now, it won’t be long before Martin Sensmeier is a household name.  Here are 10 things you didn’t know about Martin Sensmeier.

1. He Was Raised In Alaska

Martin was born in Alaska and raised in a small village called Yakutat. His father is German and Tlingit and his mother is Koyukon-Athabascan. Martin is very proud of his native roots and he often does speaking engagements discussing his experience as an indigenous person in the entertainment industry.

Martin discovered his interest in acting at a pretty early age. During an interview with Men’s Fashion Post Martin said, “I think it was fourth grade when I did my first theatre play and in sixth grade, then I did them until Junior High and kind of stopped doing them. But I always daydreamed about it. I caught the bug early. I don’t know if I was any good at it, but it felt like I knew what I was doing. I just loved it.”

Despite still being somewhat early in his acting career, Martin has already gotten lots of great opportunities – one of which was the chance to be part of a video game. He was the voice of Chief Eddy in the 2020 video game Tell Me Why. There’s no word on if he plans to do more voice acting in the future.

Although Martin fell in love with acting when he was young, it wasn’t always something he considered a viable career opportunity. Instead, he focused his efforts on learning a trade. When he was 15-years-old he started welding and he eventually got a job working on an oil rig.

5. He Started His Career As A Model

Martin’s first introduction to being in front of the camera was his work as a professional model. Working as a model allowed Martin to gain access to the entertainment industry. Mdeoling was also a great way to him to utilize his love for fashion and his sense of style.

With his good looks, talent, and success, most people would probably assume that Martin has built a very active social media presence. That doesn’t seem to be the case, though. Although he does have an Instagram account, he doesn’t spend much time posting.

Martin is a proud dog person and an even prouder pet parent. That being said, however, being a dog dad definitely comes with its not so fun moments. In a YouTube interview with Men’s Fashion Post, Martin shared that one of his biggest pet peeves is when his dog accidentally uses the bathroom in the house. Unfortunately, since Martin isn’t very active on social media, we weren’t able to find any pictures of his dog.

8. His Favorite Food Is Smoked Salmon

Is there one food that you can eat over and over again and never get tired of? For Martin, that food is smoked salmon. While talking to Men’s Fashion Post he shared that that is his favorite food. As someone who is originally from Alaska, he’s probably had some very good smoked salmon.

Martin is a relatively private person and he hasn’t shared too much information about his personal life. One thing he has shared, however, is that he is a very devoted dad. He is in a relationship with singer Kahara Hodges and the couple has one young child together.

Getting the chance to work with Denzel Washington has been one of the biggest highlights of Martin’s career. Not only was it a great opportunity for him professionally, but it meant a lot to him on a personal level as well. Martin told Cowboys Indians, “Denzel, for a lot of Native people, he’s everybody’s favorite actor. He’s one of the greatest of all time. Of course, I don’t speak for all Native people. I just know a lot of Native people like him…When you see somebody like Denzel portraying those different kinds of roles…we don’t have a Native person up there, and I can identify with Denzel more than Yul Brynner.”