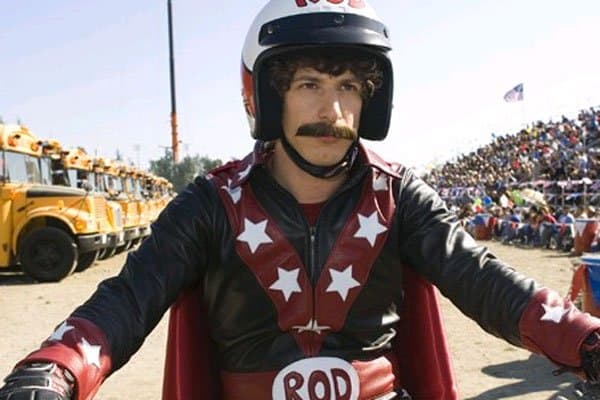 It’s hard to believe but the movie Hot Rod came out about a decade ago. Andy Samberg was still trying to become a well-known comic on the Hollywood scene and was making some serious headway. This film didn’t really do much at the box office but it did enough for Samberg’s career to elevate him in a way that saw his career really start to take off. From that point on most people knew about him and were content to sit and watch. Since then he’s been on the rise in TV and in film, and has done fairly well for himself. A lot of people wouldn’t like remember this movie unless it was one of their favorites, but for Andy Samberg it was a way in which he could finally break into the spotlight.

Here are a number of things you might not have known about the movie.

10. The stuntman trying to jump over the bus actually broke his leg.

Gotta give it to stuntmen and women, they take a horrendous beating sometimes for their job. The kind of things they go through on a regular basis can risk life and limb for just a brief moment on camera that a lot of times they won’t ever be known for.

9. The band called “Gown” is actually Queens of the Stone Age.

It’s kind of interesting why they wouldn’t use their real name, but in a film I suppose it doesn’t matter. They were awesome as always. Sometimes the director just wants to keep the fantasy without bringing too much of the real world into the picture.

That might not seem like a lot of time but if you try to do anything strenuous for 47 seconds you might find that it’s a lot longer than you think. Falling down a hill for even ten seconds can be painful, but almost five times that long offers a lot more time for a accidents to occur.

He had them put in and then left them there for the rest of the shoot supposedly. Real hair would have taken too long to grow and he didn’t want to wear a wig so something had to be done.

6. Danny McBride is holding a real beer through most of the film.

You might as well make it look real, right?

5. Andy Samberg performed the stunts that he was allowed to.

It’s not often than actors perform this many of their stunts, but Samberg was adamant about doing his own stunts in the film.

It takes a lot of people to make a scene great, and having enough extras to cheer on the protagonist and even just witness something is important.

3. All of Samberg’s stunt doubles had prosthetic noses so that they would closer resemble him.

The scene can be so easily botched if a stunt man or woman doesn’t resemble the character they’re playing that well.

2. The scene in which Rod asks out Cathy and starts laughing hysterically was improvised.

There are times when improvisation is absolutely needed. This might not have been one of those times but it worked.

1. It was filmed in Vancouver, British Columbia.

The allure of filming in BC must be that it can mimic a lot of different places so as to appear as though the film is being captured on site.

It’s still hard to believe that this movie is a decade old.