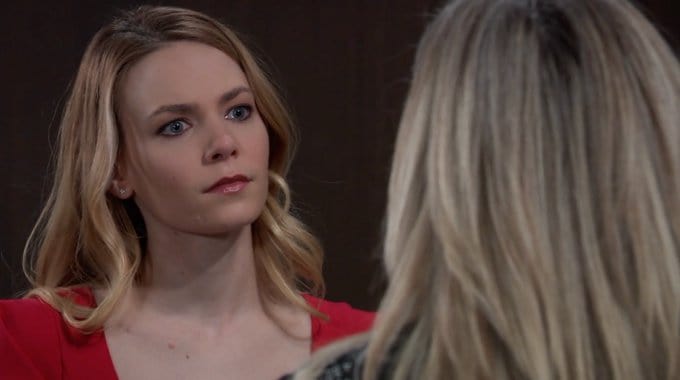 General Hospital fans are happy for Nina moving on from Valentin. He was bad news for her, but Jax is a much better choice and a much better option. It’s all good right now, but we think that there is a situation in which Valentin might not be very happy. It’s a lot, and he’s not happy. He’s about to run into Nelle, and we can assume that this is not something we want to see right now. You see, there is nothing that we think might be worse than the two of them in the middle of whatever it is they are working on right now. There is no way that they will not decide that they are both miserable and looking to seek revenge on every single person in the world, and they might just work together. This is the kind of power backing that Nelle needs in order to make some big game plans.

Willow has decided that in her time of need, she needs some help. She needs someone to be with her, to comfort her, and to remind her that she is worth so much more than what she is currently feeling. She’s lost so much of who she is and what she’s been doing in her life lately, and she does need that reminder in her life. But, she’s not turning to who we thought she might turn to. Instead, she’s turned to Chase, and she is allowing him to be her comforter and her protection and her peace. She is allowing him to be there for her, and this might be something that makes Michael feel as if things are not going his way. They are close, and he might have thought she would turn to him for this kind of support.

On this day in 1985, Anna Devane made her Port Charles debut. 🎊Please help us congratulate @finolahughes on her 35th Anniversary with #GeneralHospital! 🎉#GH pic.twitter.com/3D1PCFFdFQ

We love to celebrate her!

This is going to be a day that comes complete with a master face-off that no one can handle. You see, we are all going to see some issues around here, including the fact that Sonny and Nikolas are going to face off. There was a time in their lives when they were a bit friendlier, but this is not one of those times. They do not see eye-to-eye right now. They do not have much going for them, and they do not know what to do to make this all seem better. They are struggling, and we get that. We do understand what is going on is going to be a bigger problem, and w also think that there is not a chance at all that Sonny will not end up on top of this one.

Jason is not going to keep his word this week. Last week, he was more than a little bit adamant that he was not going to have anything else to do with Sam until things clear up and they have a chance. Now, he’s with her. They are stealing time, they are being together, and they are going to do this with one another in a way that is good for them. They are good to go, and we appreciate that. But, there’s also more to this than meets the eye. They are going to do this and make sure no one knows, but does someone know? We aren’t sure, but we might assume this is going to take some new meaning.