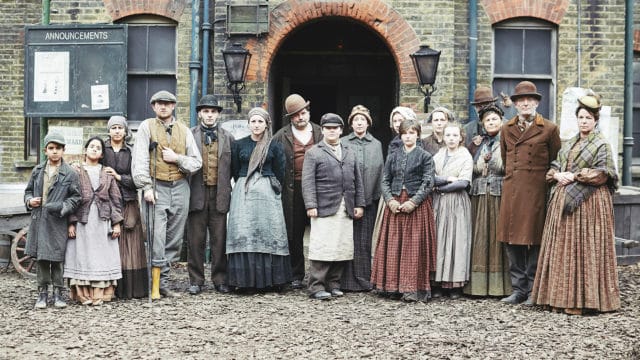 Victorian Slum House is a reality TV show that puts members of the British middle class with an ancestral connection to London’s infamous East End in recreations of Victorian slums. They are meant to live and work in the same manner that their ancestors did in those times, thus providing the viewers with insight into the brutal living conditions endured by the millions and millions of people who made up the urban poor of 19th and 20th century Great Britain.

Here are five things that you may or may not have known about Victorian Slum House:

Being a slumlord in the Victorian Age was a profitable venture for the church as well as the peers of the realm who owned most of the housing, as shown by the fact that the rent per cubic foot could be as much as ten times higher than the same figure in better housing in the rest of London. Even worse, most of the slumlords’ earnings turned into pure profit for the simple reason that most of them saw little reason to improve the conditions of their housing stock. Combined with the cheap materials and even cheaper construction, this resulted in horrific living conditions, which explains much about the rate of mortality at the time.

Food production has benefited a great deal from advances in both techniques and technologies in recent decades. As a result, it should come as no surprise to learn that food was much more expensive in Victorian times, so much so that it cost two-thirds of slum-dwellers’ income. Even worse, most slum-dwellers did not have steady jobs but instead performed piecework at home, which paid so little that all members of a family had to pitch in to make enough to pay the weekly rent. If they failed to do so, they could be evicted with little notice, thus sending them to either the streets or the notorious workhouses.

Victorians Had a Poor Understanding of Hygiene

The Victorians had a poor understanding of what caused diseases, meaning that their public health was nothing less than nightmarish when compared to ours. For a perfect example, look no further than John Snow, who discovered that cholera was spread by fecal matter in the drinking water rather than the theorized miasma in the air. Even worse, the British government refused to accept the man’s conclusion in spite of the evidence that he was able to bring to support his case, not because it had a better idea of what was going on but because the oral route of transmission for cholera was too unpleasant for people to contemplate. As a result, it took more outbreaks of cholera for people to begin accepting John Snow’s conclusion.

Victorian Food Was Not Safe for Consumption

Most Victorians ate a lot of bread but not much else, which was a serious problem for a number of reasons. First, bakers were under serious economic pressure, meaning that lot of them chose to adulterate their products using substances such as chalk and alum powder. Second, bakers operated under brutal conditions, with the result that their products were often flavored by copious amounts of sweat, which is less than hygienic. Third, millers were even more notorious for adulterating their products, meaning that even honest bakers often made bread that was not safe to eat because of their ingredients. Fortunately, the British government began cracking down on such practices in later times, though that must not have been much consolation to the people who had to eat nothing but bad bread before it stepped in.

The Victorians Were Much Shorter Than Us

Conventional wisdom says that our predecessors were shorter than us, which can be blamed on their poorer nutritional intake as well as health issues. This is true, but at the same time, it is so broad that it leaves out a lot of nuance. For example, the examination of human remains has revealed that men living in 9th to 11th century Europe reached an average height of 173.4 cm, which is not that much shorter than their modern counterparts. However, men had fallen to an average height of 167.05 cm by the Victorian Age, which speaks volumes about their living conditions as well as all of the other problems that plagued them.