‘You think you can change how things get done in Chicago?!?’

With that statement, made by a veteran cop now ‘reassigned’by new Superintendant of Police Teresa Colvin (played by Jennifer Beals), the audience learns early what The Chicago Code is all about. Created by Shawn Ryan of The Shield fame, The Chicago Code looks to alter the typical broadcast network crime procedural by serializing the story with an overarching theme of corruption in one of America’s great cities. Aided by a strong cast filling out what could be some rote characters, and, of course, having one of the most compelling characters on television in the City of Broad Shoulders, The Chicago Code is the best network show premiering this winter, if not the whole 2010-2011 season.

Code centers on Teresa Colvin, Chicago’s first female Superintendant of Police. She is an intelligent, cagey, and ambitious (in a good way, not a Lady Macbeth way) woman who has made it her life’s work to rise through the ranks of the Chicago Police Department in order to fight the crime and corruption that led to the destruction of her parents’marriage. When she is denied the funds to start a corruption task force by influential Alderman Ronin Gibbons (Delroy Lindo), Colvin enlists the help of her former partner, Detective Jarek Wysocki (Jason Clarke), to circumvent the politician and look into Gibbons himself. The rest of this world is populated by Wysocki’s new partner Caleb Evers (Matt Lauria), Wysocki’s niece and ward Vonda (Devin Kelley), and Vonda’s partner Isaac Joiner (Todd Williams).

Now, at first glance, Code doesn’t appear to be any different from most procedurals, and there are certainly procedural elements to the show (the murder of a couple figures prominently into the pilot). Small things, however, start to set this series apart. First is the serialized nature of the corruption story. While something like Law & Order does have certain through-lines that carry over between episodes, they are mostly of a personal nature. Here, corruption is the ‘Big Bad’villain that the characters will tackle throughout the season, if not the series. 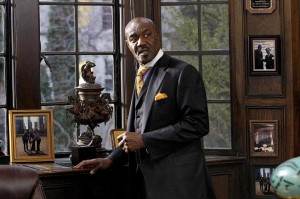 Second, is the use of voiceover in an atypical way. As opposed to the voiceover being used strictly in an expositional manner, or to sum up the action, the voiceovers in Code have a more film noir feel. They add color to the scene and flesh out the characters in a way I found unique; I felt like Humphrey Bogart could have been saying them. Each of the characters gets her or his opportunity to use the voiceover to comment on the action we are seeing in a deeper way, and in at least one instance, to a rather devastating effect.

Third, as I mentioned above, is the fact Code is shot on location in Chicago. Like ABC’s Detroit 187, the city truly is a character (in fact, one of the reasons I have stuck by Detroit 187 is because I find the depiction of Detroit to be quite compelling). Chicago is one of the great American cities, and in even just the one episode I have seen, it is clear Code is going to take full advantage of its particular qualities. From the vibrant commerce of The Loop, to the lakefront, to the ethnic neighborhoods, to the student and bourgeois enclaves, there are many stories that can be told in and around Chicago. Shawn Ryan was masterful in depicting the grit of Los Angeles in The Shield, and there is no reason to believe he can’t do the same in Chicago.

The other elements necessary for a successful series are in place, too. The actors are universally strong, headed by nice turns by Beals (a native of Chicago, sporting a great accent), Clarke and Lindo. I have actually never seen any of the supporting actors in their previous work (I couldn’t get past the shaky camera in Friday Night Lights‘first season, so Matt Lauria is new to me), but they play well off of the lead actors, especially Lauria. His eager new detective’s desire to make a good first impression on Wysocki leads to some pretty humorous bits concerning the compilation of lists more common to a high school bathroom. (Actually, for those that have seen Detroit 187, compare the way Lauria’s Caleb Evers and Jon Michael Hill’s Damon Washington both try to ingratiate themselves with their new veteran partners. It’s an interesting contrast of writing and acting choices, and both very effective.) Additionally, the physical production is top-notch, and features a pretty fantastic car chase in the pilot episode. Further, the writing is excellent, even if it does indulge itself once or twice with some hackneyed characterizations of its subject location (e.g. ‘If there’s one thing Chicago knows, it’s how to punch back.’). 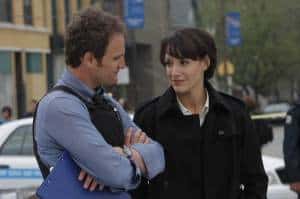 If I have to fault the show anywhere, it may be in the somewhat stereotypical nature it treats a couple of its characters, something I am currently chalking up to the fact that I have only seen one episode. For example, Isaac Joiner, Vonda Wysocki’s partner, is a tall, athletic black man who is cocky and brash. If we find out in a couple episodes that he was a wide receiver in college, but blew out his knee and couldn’t play again, I would be sadly unsurprised. Similarly, Vonda, while outwardly tough, is at one point bested physically and then breaks down crying. Paired with some of the comments thrown at Colvin throughout the pilot, the episode almost screams out ‘Women aren’t tough enough to be cops.’Hopefully, this is all intentional, and I should be thinking these things so the series can turn those perceptions on their ear. As Ryan is at the helm, I will believe that this is the case, but it is something to watch going forward.

All in all, I thoroughly enjoyed the first episode of The Chicago Code. I believe it offers enough that is familiar that people will sample it, yet is different enough from what is currently on the air to stand out and be successful. I am a little curious as to why Fox isn’t debuting the show after the Super Bowl, as the audience for the Big Game seems to be much more in Code‘s wheelhouse than Glee, but hopefully the House lead-in it will receive on Monday night will be sufficient to get it off the ground.

Perhaps there are too many cop shows on television, but if another one is going to be produced, it should be done with the excellence of The Chicago Code. I recommend you check it out, as I give it an A-.

The Chicago Code debuts Monday, February 7 at 9:00pm ET/PT on Fox, and be sure to come back for my reviews of The Chicago Code following each episode, here at TVOvermind.