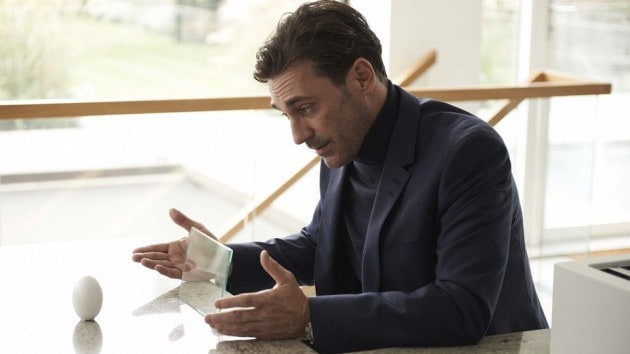 It’s been nearly two years since the last episode of Black Mirror (“The Waldo Moment” aired on February 25th, 2013) – and boy, has it been missed. Although “White Christmas” is no “Fifteen Million Merits” in the eloquence and power of its social critique, it’s a wonderful counterpart to the saturated sentimentality of Christmas stories, a three-part story entwined by the overarching story of Matthew (Jon Hamm), a man who thinks he’s a good person who just did a bad thing. However, as each of the episode’s twists and turns reveal itself, “White Christmas” turns out to be a story about a world that’s gone as cold and absent of color as the snow covering the ground this time of year.

As always, “White Christmas” takes ideas present in the modern world, and pushes them two steps farther: “White Christmas” exists in a world where ‘blocking’ someone has become a physical thing: with the flick of a wheel, one human can block another completely, graying them out in the physical world, turning their faces to monochromatic mush and their voices into indecipherable, muffled noise. The first and third parts are directly about this idea of ‘blocking’, with the intermediate story serves both Matthew, and the other character (Joe, played masterfully by Rafe Spall) he spends trading stories with in a small cabin in the middle of nowhere (literally, as it turns out).

The intermediate story really serves both characters: it establishes just how well Matthew is at reading human behavior, a first-hand experience of his job as consciousness guider – or whatever you want to call a man who convinces copies of brain waves to act as operators of a smart house for rich people. In it, we watch Matthew explain and bully a copy of Greta (Oona Chaplin of Game of Thrones) into being the digital servant to the ‘real’ Greta; not only does it show us how good he is at his job, but also the perverse tendencies lying underneath the surface of the character, played out creepily in the episode’s first part, with Matthew’s long gaze at the real version of a woman he just completely dominated and manipulated into his doing.

Matthew’s manipulative ways and unsettling undercurrent are really the focus of the entire special; and Jon Hamm convincingly sells each and every facet of the man, a person so well in tune with human behavior, that he (mostly) knows how to hide his true self from the real world. It’s not much of a fleshed out, complex character, but Hamm is breathes life into the role of puppeteer with his genuine ability to connect with human beings. However, what happens in a world when we can take – in many cases, encouraged – to take our talents, hobbies, and desires too far? What happens when we’re allowed to endlessly indulge in playing God of our own universe, operating with some belief that we have complete control over everything?

For Matthew, it leads him to his secret night-time hobby: helping men with augmented eyes pick up women at bars. In the opening act of “White Christmas”, Matthew’s seemingly innocent assistance of a lonely man trying to pick up women peels back layer by layer to reveal its perversity: first, it’s revealed Harry (the man whose eyes Matthew and a number of other online friends see through) is not at a bar, but an office party for a company he doesn’t work for. Then, Matthew helps Harry manipulate the situation to isolate one particular woman, guiding him into a flirtatious affiar and the possibility of taking her home.

What I always love about Black Mirror is how it pulls in the audience with the slightest bit of hope; even though it’s quite obvious how disturbing Matthew’s “hobby” is, it’s hard to not empathize with lonely Harry, and want to see him connect with another human being (seeking true human connection is always, always a theme in Black Mirror – and the show often revels in the fact we live in a world where we actively deny it to ourselves). That is, until it turns out their next-generation peep show turns into a murder-suicide, when the woman Matthew helps Harry hook up with is a schizoprenic hearing “voices” in her head (and thinks Harry talking out loud to Matthew is the same thing). He seeks human connection, she finds, they both end up dead – and Matthew is left scrambling, setting off the events of the two parts in front of it.

Of the three, however, the last is the strongest, a twisted story of love and betrayal that takes the societal ideas at play in the first two, and uses them to frame a very personal story. The specific character beats within it, again, are unsettling: driven by his girlfriend blocking him, Joe stalks his pregnant girlfriend every Christmas for years until the year after she dies in a horrific accident, when the (legally-enforced) block ends and he can finally see the child he never got to meet. And when he finds out that the love of his life had been cheating him, he unravels – bringing him to the digital confession room Matthew and the police constructed for him, part of the deal Matthew made to be let free of the charges he faced from the Harry incident.

In that moment, Black Mirror‘s dual stories about personal tragedy and modern technology meet in the most Mirror way possible: Matthew lives in a future when the police can both make copies of our consciousness for the use of confession, and one where one can be sentenced to be blocked by the world, forced to live in a sea of grayed-out faces and inherent, completely unseen danger (being a sexual predator, Matthew is colored red to others, and it is suggested some vigilante justice occurs sometime after the credits roll). We live in a world so dangerous, we can be broken down and destroyed by things we can’t even see (just ask Sony if that can happen): it’s so easy to permeate who we are (and more importantly, what we are) through technology, our worlds can be turned upside down from anywhere, at any point (ideas mirrored by the hidden things that come to damn us in the physical world; Beth’s pregnancy, Matthew’s “evidence”, the snow globe that turns into Joe’s murder weapon).

What I love about Black Mirror is it doesn’t pretend to have answers to any of these questions: instead, it merely acts as a guide to where we could end up in society, if the right (and wrong) levers are pushed at the same time. At stake in every Black Mirror story is the one thing that we can’t define, replicate, or artificially create in any way: love, something under constant protection and threat (the yin and yang of modern living) from an increasingly disconnected world. Human connection is what makes the human experience matter; not the perfect breakfast every morning (I could watch Jon Hamm chew toast for hours, by the way), not the possibility of being famous, nor the promise of redemption from others that doesn’t actually exist (since redemption can only come from self, Matthew’s “surprising” punishment is really an obvious one).

At times, it does feel like “White Christmas” forgets this, eager to Escher-ize its world and pile on the twists at the end of each one of its six parts – and in the end, it does make some of the material (particularly in the brief second act) a little too ruthless to be truly contemplative, pushing boundaries and presenting existential ideas without really turning them into something graspable (for example; what happens when a consciousness kills its “real” self? Or what happens when someone blocks someone else strictly to murder them?). Regardless, the central ideas of “White Christmas” speak to human nature in the modern world with the sharp clarity Black Mirror is known for, a collection of fascinating, unsettling moments that made for a wonderfully upsetting Christmas special.