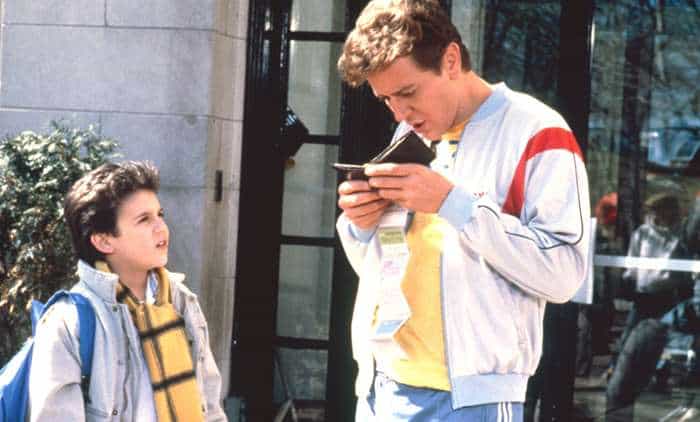 Fred Savage is one of those stars that a lot of us remember fondly since he was a part of our childhood, even if he seemed to fall off the map after a while and didn’t do much of significance. As a child actor though Savage was someone that we really looked at as a certified star and someone that we wouldn’t mind being like since he seemed easy to relate to. He wasn’t the kid that all the girls fawned over and he wasn’t the big hero archetype that’s still prevalent in kid films, but he was the kind of everyman character that a lot of people could see as someone that they might get along with and could possibly understand since his character rarely ever went above and beyond the call of being a kid. That being said though some of his movies really did stand out just because he was the kind of person that could execute a role without really needing to do anything other than be himself.

Of course monsters under the bed aren’t real, right? Well, that’s true enough when the lights are on, but in this movie when the lights are off and it’s nighttime the monsters are given a gateway that opens and allows them to pass from their realm into the human realm, where they wreak all kind of mischief. When one kid finds this out however he discovers that a lot of monsters seem to be more into pulling pranks and making life miserable rather than consuming children and scaring the living daylights out of them. Unfortunately there are different monsters that are bent on domination as well as mayhem on the level that is more along the line of what people have been scared of since childhood.

Video games are life to some people, but to others they’re simply something that makes sense as they allow them to live in the moment and not worry too much about the world around them that they can’t change. When a young boy is found to be a whiz kid when it comes to video games his brother finds a way to smuggle him to Las Vegas where a huge competition is taking place for cash prizes. The young boy, Jimmy, ends up winning the competition as his skill with video games is unmatched, but the movie doesn’t end there as he and his family travel to final place where he last felt the happiest, leaving a few mementos behind to signify that he’s moving on.

Parents and kids definitely think that the other has a great life when it comes to their preconceptions about one another, but when a father and son get to experience each other’s lives and figure out just how easy they DON’T have it, their perspectives change in a big way. Admit it, a lot of us have thought that our parents had it easy once or twice in our lives, only to realize when we grew up that they were working their butts off to make sure that we didn’t see as much of the hardships they had to endure. This kind of movie does make a person think quite a bit and grants a bit of perspective that we might not have otherwise had.

MOLE! Yes, the mole scenes in this movie were some of the best since poor Fred Savage kind of had to sit there and take it as part of the gag, which is all well and good since he’s the kind of actor that can make this role work and make it undoubtedly funny. After all, the only thing he has to do is stand there and allow Mike Myers to make one joke after another as Dr. Evil or Austin Powers when it comes to the big, brown, hideous, hairy mole on his face. Admit it, when you saw the mole you couldn’t help but notice that it was made to look as disconcerting as possible, if only to make people cringe a bit.

Still one of the classics, The Princess Bride has held up throughout the years as one of the favorite movies of a lot of people, and has even become a favorite of many within the current generation since it’s the type of story that never seems to get old. Being that Savage was simply the child listening to the story it would seem that he wasn’t quite an important part of the movie, but he was noticeable so it was important to note that he was there. Plus, every story needs someone to listen to it and to remember it in order to be passed on.

Fred Savage is still a great actor today, but it would be great to see him more often.

Is it Possible There is No ‘Real World’ in The Matrix?
Comics Lists News Things You Didn't Know Whatever Happened To