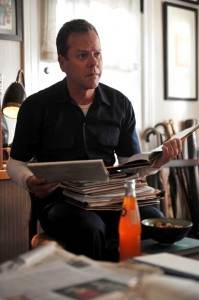 Touch premieres its first episode tonight, created by Heroes showrunner Tim Kring and starring Kiefer Sutherland in his first TV role since the end of FOX’s mega-hit 24. The hotly-anticipated series features Sutherland as a widowed father who finds himself realizing his son’s unusual nature actually represents a gift that might allow them to see the future, and unlock deeper mysteries of the universe itself.

Earlier today Jon Lachonis posted a review with his own unique take on the new FOX series Touch, which shows a special preview of the pilot tonight and officially begins its run on March 19th, but I thought I’d chime in with a few thoughts of my own. Unlike Jon, I never paid much attention to 24 and therefore had a different experience looking past the omnipresent Jack Bauer comparisons to see what this new mystery series was all about. Jon’s also a huge quantum physics buff, something Touch ‘touches’on extensively, so you’d do well to check out his more overall look at the pilot before you watch tonight.

That said, the other big name attached to the series should be one most people remember from Heroes, that of series creator Tim Kring. We’re all familiar with how Heroes debuted a strongly conceptual and intriguing first season, before writing strikes and changes utterly destroyed anything remotely compelling about the superhero drama. Those bitter memories might make a few viewers uneasy given how Touch shares something of a similar concept to Heroes, in that it follows multiple characters across the globe who find themselves connected to one another. Fortunately, Touch has a stronger grounding in reality than Heroes, which despite some stumbling helps sell its core conceptual ideas of destiny, and the inter-connectedness of life.

By now you’ve likely read the premise of Touch, in that Kiefer Sutherland plays Martin Bohm, widowed father to a seemingly uncommunicative* child who sees complex patterns in numbers and the world around him that manifest as a type of future-vision.

(*) Both here and moving forward, I’m going to shy away from identifying Martin’s son Jake as Autistic, or exploring the implications it might have on the series. Movies and TV have notoriously misrepresented Autism in the past, and even Touch’s pilot itself shies away from classifying Jake strictly as such. Jon Lachonis’s Touch review has a much more personal take on the role of Autism in the series, which you should check out. 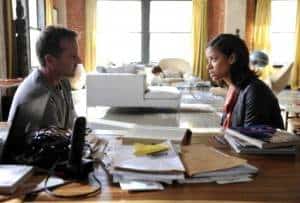 Also along for the ride is Gugu Mbatha-Raw (Undercovers) as a social worker assigned to Jake who comes to believe in his abilities, Danny Glover as a private researcher who understands the nature of Jake’s gifts, and even Titus Welliver (LOST) as a mysterious figure with a connection to Martin’s past. There are also a host of supporting characters from around the world that the pilot follows, though I’m not certain if the series will continue to focus on said characters, or pick up new ones as Jake’s gift sends his father hurtling into a variety of new puzzles.

The good news is that conceptually, Touch offers up a movingly compelling narrative that culminates very well into its central thesis of inter-connectivity, and sets up a strong premise for moving forward with the series. It takes a long time in building up to the climax, but once the plot threads from across the globe start intersecting all at once in a very moving intercut sequence, I found myself thoroughly on board with exploring Touch‘s more philosophical nature. That isn’t to say that the pilot doesn’t stumble quite a bit in getting to that point, but as long as you stick the landing, right?

The problem lies in that Touch seems to have worked backward from getting to that point, rushing its setup so that very few character actions resonate plausibly. Not much effort is spent in establishing how, why or to what end Jake developed such an incredible gift, yet both Martin and Clea, two rational adults seem to buy so readily into the idea that Jake has explicitly mapped out the future in his complex writings. Martin desperately wishes to connect with Jake, and understandably so, but I couldn’t quite bridge the gap between that desire and Martin hurtling toward a Grand Central payphone at 3:18, with no plausible idea of what, if anything might occur at that time. By the same token, it seems entirely contrived that Simon Plimpton’s lost cell phone would travel around the world from character to character, touching lives for no other conceivable reason other than the writer wills it so. Forgive my cynicism, but if a stranger on the other end of a cell phone across the world purports to be a suicide bomber having second thoughts, I’m not sure that ‘I love Chris Rock too!’or ‘I’ll buy you an oven!’would be among my conceivable reactions. Heroes suffered from unreliable character motivations as well, so if Touch can reign in a few of its more extenuating reaches it’ll have far less trouble developing strong character dynamics over time. 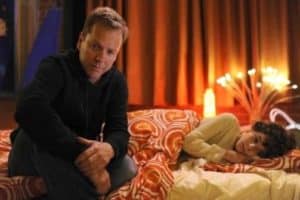 Admittedly, I’m not entirely sold on Kiefer Sutherland in the role of Martin Bohm either. I made mention earlier of unfamiliarity with 24 working to my advantage, even if some of Martin’s more tense moments do feel distinctly Jack Bauer-esque. Rather, I found it difficult to see Kiefer’s Martin accessibly, almost too angry or intense of a portrayal to convey the sheer wonder at what his son Jake represents. With time however, the character could soften a bit. There’s a strong effort to paint Martin as an everyman having drifted from job to job, and humbled by his wife’s death in 9/11, but I can’t help wondering if someone a little gentler might have made Touch‘s more fantastic elements more empathetic.

Overall, there’s a strong premise to Touch that will definitely evolve in time, given that the pilot doesn’t set up much to why Martin needs to follow his son’s machinations on a weekly basis. I’m not sure what most people will make of Touch‘s more complex philosophical questions, but the series definitely ranks among one of 2012’s more intriguing offerings. 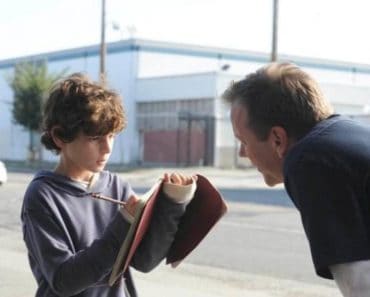