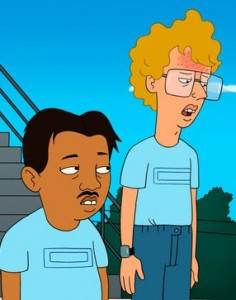 I was completely on board with the idea of bringing Napoleon Dynamite to TV as an animated series. The movie never held much esteem for me, as I don’t think it really could have for anyone. Napoleon Dynamite was by no means a good film, or even a bad film, just kind of a quirky, and bizarrely memorable two hours that grew on people without them realizing.

It certainly didn’t beg a sequel, but its eclectic weirdness seemed like it would match animation well and bringing back the entire cast to voice their animated counterparts made the prospect more than exciting.

That said, Napoleon Dynamite as an animated series is not Napoleon Dynamite as a film. From its very outset the animated series feels familiar, its static opening shot and accompanying music evoking the film’s unique feel, but somewhere in between Napoleon’s steaming forehead and a Chernobyl-affected Starla firing a corn cob cannon at youngsters in a rural fight club, you realize how off the beaten path things have gone.

On the one hand characters with already exaggerated features and voices like Napoleon or Kip fight right in to such absurdity, but the more subdued characters of the film don’t translate particularly well in the animation. Uncle Rico comes to mind first and foremost, as Jon Gries delivers a much more purposefully comedic voice than the more subdued buffoonery of the film. With the film Napoleon Dyamite we would laugh at Rico as an insane man in a sane world, whereas the animation paints both the man and his surroundings too tonally similar to mine any humor from. It’s that inability to balance styles of humor that causes this incarnation on Napoleon Dynamite to fall flat.

The first episode of the series, ‘Thundercone’deals with Napoleon’s rage-inducing acne cream landing he and his brother Kip in some sort of rural fight club dubbed the ‘Pioneer Punch Club,’which unfortunately proves too absurd a premise to launch the series on. Even the presence of Amy Poehler as Misty, the object of Kip’s, and eventually Napoleon’s eye doesn’t add very much to the episode, which at best serves as an introduction to the more heightened reality of the animated series. ‘Thundercone’unfortunately carries the burden of transition, which means that those expecting humor more akin to the style of the film will inevitably wind up disappointed. As for those watching the series fresh, I don’t think they’d find much to hang their hat on either.

FOX also debuted the show’s second episode tonight, ‘Scantronica Love,’which had me chuckling regularly and offers far better look into how Napoleon Dynamite might work as an ongoing series. ‘Scantronica Love’makes the characters into the absurdity, rather than the situation by showing how the various students react to the results of a computer compatibility test. I almost wish the ordering of the two episodes had been reversed, but then again ‘Thundercone’might have left too bitter of an aftertaste for anyone to watch further episodes of the series.

I’ll be interested to read how people react to these first two episode as both fans and non-fans of the film, which in and of itself already divided people. I’ll keep checking it out on a weekly basis, but then again, I said the same of Allen Gregory. Maybe Napoleon will have better luck.