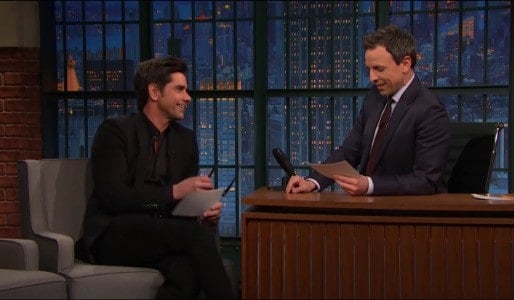 John Stamos had some fun on Late Night with Seth Meyers turning the tables on some downright mean critics and their reviews of Fuller House.

One critic called the Fuller House pilot painful, which Stamos can only assume that guy was being mauled by a bear at the time he was writing. I’m guilty here of thinking the pilot was terrible, as I’m sure many would agree, but the season truly did get better as soon as they got the first couple episodes out of the way.

Another guy compares the Full House nostalgia in the reboot to necrophilia which is definitely uncalled for when talking about a wholesome family show. Stamos has a witty comeback asking if necrophilia is like being screwed by a dead magazine which is when the audience starts to “boo” him. To which I have to say to them, “How bleeping rude!”

In the end, fan love is all that matters as Netflix did renew Fuller House for a second season less than a week after its premiere!

Check out the clip of Seth and John reading the negative reviews here: