Home
Movies
Is Gal Gadot A Good Fit For The Evil Queen? 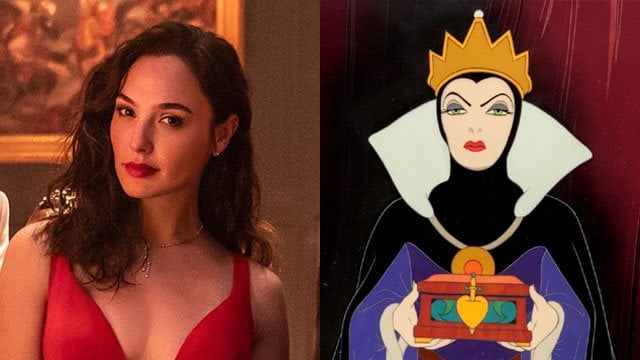 When you think about Israeli actress and model Gal Gadot, you should instantly think about Wonder Woman. You just have to associate the two together. Wonder Woman is her biggest role to date and will probably stay that way for her whole career. Not that that’s a bad thing, far from it. To play the greatest female superhero ever is quite the distinctive honor, especially since she didn’t come from an acting background. That doesn’t matter, because she’s been doing fine with her acting career. Speaking of her acting, I feel like she has gotten better. She has even admitted in the past that her experience with weapons is what got her the role of Gisele Yashar in Fast Five. Oh, and let’s not forget the fact that she’s extraordinarily beautiful and that has certainly helped her. And after her character was killed off in Fast & Furious 6, we all know where she went from there. Initially, people didn’t really like the casting of Gal Gadot for Wonder Woman, but she silenced the haters very quickly. We didn’t get enough time with her in Batman vs. Superman: Dawn of Justice, but she got the chance to fully flex her muscles in the 2017 solo Wonder Woman movie. With that movie, I saw a lot of improvement in Gal Gadot’s acting. In my opinion, she has only gotten better with her subsequent performances in Wonder Woman 1984 and Zack Snyder’s Justice League. And yes, you can consider the 2017 Justice League movie as well.

Her next big movie is Red Notice on Netflix with Dwayne “The Rock” Johnson and Ryan Reynolds. I haven’t watched it yet, but just by seeing the trailer, I can tell that Gal Gadot is playing the cunning and super tough seductress character. When you’re looking really cool next to the Rock, you know you’re doing something right. Gal Gadot has several upcoming projects she is working on, but one of them is particularly interesting. If you’re a fan of the live-action Disney animated adaptation movies, guess what? You’re getting another one in the form of Snow White and the Seven Dwarfs. The film has already landed young actress Rachel Zegler in the lead role as the famous Snow White, a casting that hasn’t sat well with fans, but let’s just wait and see. Yes, I will say that the live-action Disney animated adaptations have been hit-and-miss for the most part, but in my opinion, the many of the actors have done well with what they were given. While the casting of Rachel Zegler hasn’t caught the attention of fans, the casting of Gal Gadot as the Evil Queen certainly has. Wait, so Gal Gadot is actually playing the enemy of one Disney’s most famous princesses? Yes, that is definitely happening and the fans are curious. Curious in a bad way? Not really, but I’ll admit, this casting did make me wonder a bit. Now I stand by my words about Gal Gadot getting better with her acting. However, I have trouble seeing her as the infamous Evil Queen for this upcoming live-action Snow White adaptation.

I think it’s mostly because we’re so used to seeing Gal Gadot as the beautiful action hero always being the good girl. Now maybe it’s different in Red Notice, but I’ll be sure to check that out soon. So it’s been a long time since I’ve seen the original animated Snow White, but I remember the Evil Queen. She’s about as evil as they come, and her mirror on the wall revealed her true, hideous appearance. What remember most about the Evil Queen was the famous apple scene. Snow White bit the apple, entered a comatose state, then in her ugly form, was chased up a cliff by the seven dwarfs until a lighting bolt caused her to fall to her death. Hooray for the seven dwarfs. So there are several versions of the Evil Queen that have used that old secretly hideous appearance differently. In some versions, the old hag appearance is just a disguise or it’s her true form. It’s been a while since I’ve seen the animated movie, so I’ll have to give it a second viewing on Disney+. The best version I remember is the Charlize Theron version from the 2012 live-action adaptation Snow White and the Huntsman. In that version, the old hag appearance was her true form and she stole the beauty of young women to keep herself young.

That’s initially how I pictured Gal Gadot playing the Evil Queen, only less loud. I’m not saying Charlize Theron was bad. I thought she was one of the best things about that movie, but her version translated more to an action movie, rather than the original. I think that’s where Gal Gadot has the opportunity to do better. My only real concern is that she’s not really used to taking on those kinds of roles. In fact, I can’t think of a single time where she played an antagonist. Is that bad? Not necessarily, given that Gal Gadot is becoming a better actress. I would picture her more like the Charlize Theron version, because she’s more accustomed to doing action-type roles. Since the live-action adaptation intends to follow the original animated film, we can expect a more serious performance from Gal Gadot. I can see why so many people would be skeptical, but I think this presents a good challenge for Gal Gadot.

I think we should also consider the fact that she’s often the prettiest person in the room in her movies. The fact that she won’t be “the fairest of them all” in this Snow White movie should be an interesting change of pace. In order to sell us on the Evil Queen, Gal Gadot has to be able to play the bitter and jealous nature of the traitorous Evil Queen. Her sole motivation is to act through jealousy and selfishness, something Gal Gadot hasn’t portrayed yet in her movies. Plus, I just can’t imagine her as that hideous old hag form. That’s what make-up is for, but that’s also where she has to amp it up with her acting skills. I think she can do it, especially since she’s proven the skeptics wrong before with Wonder Woman. Only time will tell when the movie comes out, right? I think she can pull it off. Snow White isn’t my favorite animated movie, but maybe I’ll like the live-action movie better. That’s what happened with Beauty and the Beast.