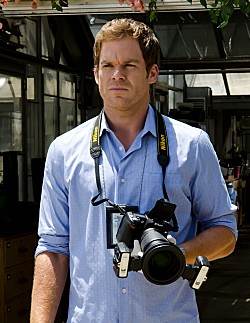 Dexter season 6 returns to carve up a fourth outing with this week’s ‘A Horse of a Different Color,’as our favorite serial killer studies the patterns of the gruesome ‘Doomsday Killer,’and faces a crisis of faith when young Harrison takes ill. With Dexter season 6’s main villains out in the open, the story ramps up full force but faces a few unnecessary distractions.

Last week’s ‘Smokey and the Bandit‘made for a fun standalone episode with a shocking twist, but still felt like a diversion from the main storyline. ‘A Horse of a Different Color’returns to the main narrative, but creates some tangential loose ends in a different way. Too many instances during ‘A Horse of a Different Color’had me asking ‘who are these people, and why do I care?’

Unfortunately, I found myself asking the same question of Brother Sam this week, an exceptionally interesting character very well handled by Mos Def, but therein lies the problem. While Brother Sam still proves and excellent foil for Dexter, we’ve gotten to know him too well, past the point of believing he might become involved in the ‘Doomsday Killer’story. As captivating as his past or relationship to Dexter’s family might be, it’s still tangential at this point unless that relationship comes under duress somehow.

Whereas earlier I lamented Dexter spending its time on Professor Gellar (Edward James Olmos) and Travis (Colin Hanks) rather than the more interesting Brother Sam, ‘A Horse of a Different Color’successfully swaps that dynamic by putting the murders, and their very public biblical nature on the main character’s radar. ‘A Horse of a Different Color’handles the villains much as Dexter did season 4’s Trinity Killer (Jon Lithgow), exploring the villains’lives outside their murderous habits, which in turn makes them more effective antagonists. There are some overly familiar beats in the way Travis contemplates a more normal human existence than Gellar would like (here with the waitress, as opposed to his sister two weeks ago), but it all works toward the goal of making the two an unpredictable pair. 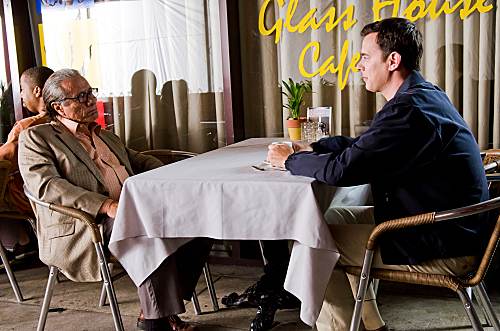 “Either you’re imagining me, or our waitress is a serious b$%#*.” -Showtime

Of course, all of this lies in the interest of posing the question of Dexter’s faith, as he struggles to find meaning in religion. Having Dexter actually attempt a prayer for Harrison’s safety speaks volumes about how far the character (and the show itself) have come since Rita’s death, but we never actually believe Harrison could be in any danger, or that prayer could really halt Dexter’s more murderous impulses. Exploring Dexter’s warped view on faith creates some fascinating discourse for the character, but I think we all know it won’t stick.

So the question remains, where is Dexter going? Our Doomsday Killer(s) are now very much the focus with their third public murder, but seeds of disagreement have already been planted . Right now the only other unanswered questions lie in what becomes of Masuka’s Ice Truck Killer hand-stealing intern Ryan (Brea Grant), but that thread doesn’t tie well into the season’s arc either, so we’re at a loss.

In the end, we’re better off taking a page from Quinn and Batista’s book, and blazing right through ‘A Horse of a Different Color’