Home
Television
Dexter
Dexter 6.12 “This is the Way the World Ends” Review 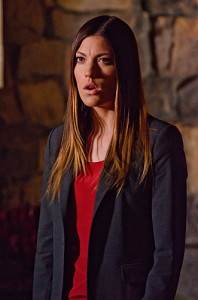 Dexter season 6 returns to reveal its twelfth, and final entry with this week’s shockingly revelatory season finale ‘This is the Way the World Ends,’as our favorite serial killer faces his final confrontation with Travis Marshall after last week’s explosive “Talk to the Hand,” and Deb stumbles upon a shocking truth about her brother. “This is the Way the World Ends” sure had a lot on its plate to address for one episode, but optimism for the next few seasons don’t quite quell the issues that season 6 created.

I’ll be honest with you, I’m almost unsure of what to say about tonight’s Dexter finale. It can be hard enough coming up with intelligent, thought-provoking things to say on an episode-to-episode basis that you might not have covered the previous week, but the reaction to this season of Dexter has been so strongly varied across the board it feels like nothing can quite cover what we’ve just been through these last three months.

First Dexter was at his high school reunion, then snake-filled religious murders popped up, Mos Def mumbled on about light and darkness, Quinn got drunk, Edward James Olmos wasn’t real, and then Deb fell in love with her brother. It’s hard to think about the nine hundred directions Dexter season 6 has gone off in without needing to sit down.

Debra knows Dexter’s secret now, or at least as much as one can infer from witnessing Dexter plunge a sword into a saran-wrapped murderer’s chest, and it’ll be some time before we even see the fallout from that event we’ve waited six seasons to see. In a way, Deb learning about Dexter’s serial killing lifestyle overshadows just about everything before it, which doesn’t speak well of the fact that we spent the entire season hunting a two religious zealots that turned out to be one. Dexter and Travis played an interesting cat and mouse game in ‘This is the Way the World Ends’to be certain, but in the end what has it given us? 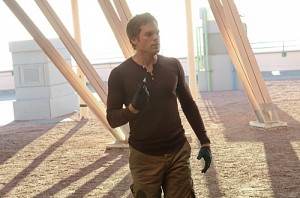 Harrison was never in any real danger, we know better than to think Dexter would kill off a child like that, and no one else really paid the price for Dexter’s errors in hunting the Doomsday Killer. It’s not like the world could unexpectedly end either, so the reality of the matter is that we spent twelve episodes on Dexter hunting a killer tangentially related to the religious questions on his mind, rescuing his blissfully unaware son, and ultimately knocking the killer out on a rooftop. No dead wife in the bathtub to come home to, no earned relief in helping another lost soul free themselves of their dark passenger, just a mission accomplished, somewhat unorthodox.

Of course Deb stumbling upon Dexter’s kill room will undoubtedly change the game for the next two seasons, but the problem with this reveal lies in how ‘This is the Way the World Ends’presents us with the twist. Finding out about Dexter wasn’t something that the current season had built toward, but rather the entire series as a whole. In that way, the reveal has nothing to do with the questions Dexter presented us with over the last eleven weeks and in a way feels even more random than Deb’s newly realized romantic love for her brother. It’d be one thing if putting the Dexter/Deb relationship under the microscope led to a more organic realization or awareness of Dexter’s true self, but instead the series drops the reveal as an accident, one which we don’t get to live in for even a moment before the season cuts to black.

It’s not an earned development, something the characters (and the audience) deserve after six years. With most every character surviving the season even with their jobs in tact, it’s as if the Dexter writers simply caved in giving us something they knew we’d been expecting, rather than a finale that really kept us guessing. 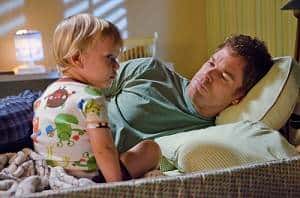 That very sentiment is what speaks to ‘This is the Way the World Ends,’as a whole, in that even the season-long discussions find hasty wrap-ups that never quite land on their intended targets. Dexter gained nothing from his exploration of religion, only the tacit knowledge that some people use ludicrous jusfications as a means to do horrible things, and others good. The Dexter writers fail to realize that hastily wrapping up that conversation with Travis strapped to a table and utilizing Brother Sam’s words doesn’t justify their exploration within the season, merely reference them. The same goes for Dexter’s rumination on the light he passes on to Harrison, and Dexter‘s sixth season even failed to address its most recent dilemma, that of Deb’s icky feelings for her brother. Despite the backlash against the bizarre storyline, we’re never really given a chance to explore its ramifications before Dexter accidentally drops his own bombshell on Deb. As long as the show continues to give us these out-there storylines, at the very least it could do us the courtesy of following through. 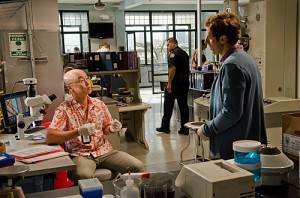 Deb and Dexter’s storyline isn’t the only thing that feels missing, or unaddressed by the end of the current season either. We never got a chance to learn more about Louis and his Ice Truck Killer obsession (or Dexter’s reaction to it), we never found a larger purpose for Ryan (Brea Grant), and we still never got a proper send-off for either Gellar or Brother Sam, likely the two most interesting characters of the season. Presumably Quinn and Batista’s beef rests on the back-burner for now, and even LaGuerta seems to have eased up on Deb, despite her continued outbursts of freaking out at crime scenes. And as for Masuka? Well, he does a pretty ‘Yoda impression.

I didn’t start watching Dexter until prior to its fifth season, thus I’ve never felt any special attachment to the series, nodding along when most fans universally praise seasons 1 and 4, condemning 2, 3, and especially 5. I saw potential in the second season, until it was literally and figuratively blown away by the show’s obvious unwillingness to deal with the ramifications of the narrative problems it constructs. I even mostly enjoyed the fifth season (I’m a softie for Julia Stiles) and had a measure of excitement for the sixth, defending it as more weary Dexter fans grew further frustrations.

You can bet that I’ll be sticking with Dexter for the next two seasons to see how the show deals with such a game-changing revelation, but that’s ultimately all we’ll take away from season 6. In spite of Gellar’s claims, we knew the world couldn’t end. Given that transparent premise, we probably should have realized the season’s main conflict wouldn’t set the world on fire either.