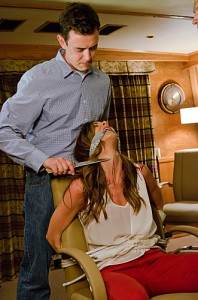 Dexter season 6 returns to launch its tenth entry with this week’s roller coaster ‘Ricochet Rabbit,’as our favorite serial killer works to correct his mistake and hunt down Travis Marshall before the Doomsday Killer can stage his next deadly tableau, as Deb continues fighting her demons in therapy. “Ricochet Rabbit” finally gets back to the Dexter we know and love, even with a few bumps along the way.

Obviously, after the shocking reveal of last week’s ‘Get Gellar,’there’s a substantial burden lifted off of Dexter‘s sixth season. No longer need those who put the pieces together early roll their eyes at how long the season dragged out the truth of Professor Gellar’s current state, and no longer must the writers concentrate on misdirecting viewers until the inevitable reveal. With that no longer hanging over, ‘Ricochet Rabbit’feels substantially more mobile and tense an episode of Dexter, though not without its imperfections.

Now that Travis has confronted the truth about Gellar and (presumably) left the vision behind, we see a much different character, far more menacing and confident. A free Travis gives Colin Hanks a much broader range of emotions to play, though it feels somewhat jarring to have the character we’ve watched all season gain such instant resolve and cunning. One could argue that the more confident and amoral side to Travis went into his projection of Gellar, and with Gellar gone we’re now seeing the complete picture of Travis’character. It also helps that we’re given some info on his background, the history of psychosis, medication, and possibly causing the accident that killed his parents. Either way, the narrative feels much more focused with its antagonists made whole.

There’s also a much stronger sense of scale to the threat, with Travis’and his ‘disciples'(including My Boys‘Jordana Spiro) latest ‘Wormwood’plan threatening to take out a good number of victims at Miami Metro with a chemical attack. Though obviously not intended as such given our familiarity with the characters and their message, it’s interesting to see Dexter exploring a bit of terrorism in this latest threat, given the size of the attack. It may not amount to anything now that Dexter seems to have foiled the threat before it even really began, but making ‘the end of the world’a little more, shall we say grandiose, does well for racheting up the tension in these last episodes. 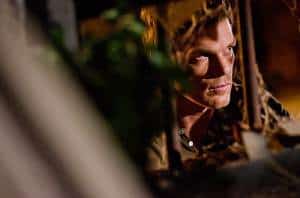 I found myself annoyed by a sentiment Dexter expressed early on in the episode, how his failure to realize the true nature of Travis and Gellar somehow meant that he shouldn’t have listened to the wisdom of Brother Sam. It seemed rather typically Dexter to create a possibility for change through such an interesting character, only to awkwardly sweep the lesson under the rug. The same rings true of Dexter’s increasing tendency to question his relationship with Harry, asking questions about his father’s parenting that I’ve wondered since season one. Thankfully, the closing moments of ‘Ricochet Rabbit’make a nice beat of tying up both these questions, as Dexter finally accepts both his father and Brother Sam’s wisdom, that some things are too big, and simply must be surrendered control to.

On the flip side of redemption, Quinn continues train-wrecking his way through the sixth season in what I’ve come to refer to as ‘the world’s least interesting plot thread,’but ‘Ricochet Rabbit’may have put some light on the horizon. Whereas Quinn’s angsty spiraling lacked direction and purpose after his breakup with Debra, having Batista suffer the consequences of his partner’s absence could make for a rather heartbreaking turn. Of course we’d rather keep Batista as a character than Quinn, but killing Batista would admittedly make a fine way to drastically increase the stakes. One might even say he’s been positioned toward the chopping block all season, forgoing the Lieutenant position to be a kind of mentor to Deb, and we all know what happens to mentors on TV.

Surprisingly little movement on either the Louis / Ice Truck Killer hand or LaGuerta / Matthews threads, if only that Deb manages to put the pieces together on Matthews with a quick phone call. At this point the audience invests far more in learning about Louis, and why a seemingly innocuous character so obsessed with Dexter would keep such a dark token, though the fallout of either may be saved for next season given how little time we’ve left in season 6. Let the wild speculation commence! 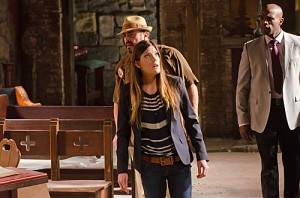 On another note, there seemed to be a recurring beat throughout ‘Ricochet Rabbit,’notably that tense or moody scenes would end up undercut by a quick gag, as if to say that things were taking themselves too seriously. Whether it was Harry’s joke about Travis talking to someone who wasn’t there, Deb’s ‘Holy Christ on a stick,’Dexter finding a drawer full of sex toys or the cute meta talk about a sister not realizing her brother’s dark nature, it seemed as though we could almost read the producer’s notes on the script, ‘NEEDZ MOAR LULZ.’I made a point of noting how the structuring and direction of ‘Get Gellar’seemed a little off, but the episodes share neither directors, nor writers. With all the showrunner shakeup Dexter‘s been through, perhaps we shouldn’t show surprise at its occasionally uneven tone.

All in all, it’s good to have Dexter back in form, even if we only have three episodes to the season unburdened by all that pesky ‘Professor Gellar isn’t real’tomfoolery. If ‘Ricochet Rabbit’can deliver, we should be in for a decent close to the season.