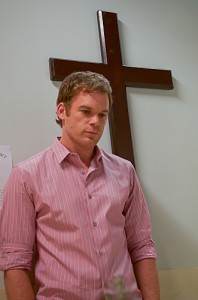 Dexter season 6 returns to slice up its eighth entry with this week’s return-to-form ‘Sin of Omission,’as our favorite serial killer gets back on track and finds himself fighting to keep ahead of Miami Metro in tracking down Travis Marshal and Professor Gellar, while Deb grows frustrated at her brother’s increasing distance. “Sin of Omission” gives us some good forward movement in the narrative, and offers welcome relief from the distracting “Nebraska.”

I was admittedly hard on Dexter last week for the vastly unnecessary detour to ‘Nebraska,’the lazy way Brian Moser (Christian Camargo) tacked on to the story, only to disappear by its end. Those criticisms were founded however, as ‘Sin of Omission’quietly sweeps the entire ordeal under the rug, failing to even mention Brian, or even address Harry’s thoughts on the subject. With Dexter back in Miami and back on the trail of the Doomsday killers, we can all forget about that entire cornpone mess of a storyline.

And that’s the question that continues to occupy people’s minds and remains unanswered by the end of ‘Sin of Omission,’the reality behind our season 6 big bads. Dexter appropriately hits the gas on that front by killing off Travis’poor sister Lisa (Molly Parker) as the Whore of Babylon, putting Travis at the top of Miami’s most-wanted list, and having the disillusioned killer agree to help Dexter hunt Gellar down.

But that’s the real trick, isn’t it? Even after Dexter manages to track down the church Gellar and Travis operate out of, his careless approach tips Gellar off to Dexter’s presence and the professor flees. That is, of course, assuming that the Professor even exists, and Dexter‘s writers honestly assume they can still fake us out with this teasing!

For an otherwise solid episode, that’s what ‘Sin of Omission’lets down on the most, as there’s no reason to keep dragging out the truth, especially with Dexter figuratively (and literally) catching up to both Doomsday killers. Honestly at this point, it feels as though the only possible way to salvage the reveal is for the Professor to in fact turn out very much alive, and a real threat to the other characters. At the very least, it would help alleviate the logistical questions Gellar being imaginary keeps creating. 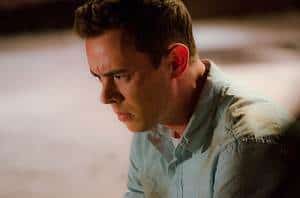 For now we keep our trust in the writers to deliver on the DDK story, trust being the operant word of the day ‘Sin of Omission” provides for us. Much as Dexter ruminates on how easily children trust, and contrasts the notion with Deb’s attempts to reconnect with her brother, he also manages to cultivate trust from Travis, bringing in his own words a little bit of light out in him after all.

I very much like the parallels ‘Sin of Omission’creates between Dexter and Travis, both killers struggling with light and darkness with their respective ‘dark passengers,’and looking to protect their sisters from the awful truth of their violent nature. This isn’t the first time we’ve seen Dexter finding aspects of himself in others, and I certainly wouldn’t expect Travis to last beyond the season (even with Dexter‘s recent renewal for seasons 7 and 8), but for now they’ve created an interesting dynamic in having Dexter provide a sort of mentorship to Travis.

‘Sin of Omission’also very much continues the trend of Dexter season 6 becoming all about Deb, as we’re privy to much more focus on the dynamic between the two, after they’ve been very much kept apart in episodes past. While we certainly don’t always need to see it, therapy has been good for Deb’s character, and pointed out some of the more self-involved and groan-worthy behavior she exhibits.

Last year’s season finale flirted strongly with the idea of cluing Deb in to Dexter’s true nature, separated from his kill room by a mere plastic sheet, and with the amount of attention placed on their relationship this season I should hope the writers build toward finally addressing the elephant in the room. If indeed seasons 7 and 8 are to be the last we see of Dexter, there’s ample room to explore, and develop Deb’s discovery of the truth, much as the Dexter books have already gotten out of the way. 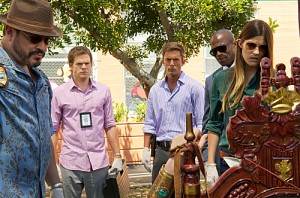 And now…the other guys. It’s not that Dexter‘s side characters don’t have a place in the narrative, but by this point in the season we’re hard-pressed to care about Batista disapproving of his sister Jamie’s taste in ‘intern puppy dog’Louis Greene, or Quinn’s latest spiraled descent into pathetic misery at a strip club. ‘Nebraska’managed to put an effective cap on the end to his and Deb’s relationship, so why bother continuing the thread of his depression? Unless Quinn earns himself a big win, or finally bites the dust this season, we’ve simply no incentive to follow along. At least the writers finally dig LaGuerta out of the hole she’s been in this season by actually affording her something to play besides a thorn in Deb’s side, so for the moment I’m intrigued to see what they do with the idea of LaGuerta covering up murders for an unseen figure.

Though I still miss the character, at least ‘Sin of Omission’does well to continue measuring the impact left on Dexter by Brother Sam in spreading light against his dark passenger. There’s a playful experimentation in Dexter finding answers to his problems in Brother Sam’s bloody bible, and it’s good to know that the show still finds ways to explore the goodness in Dexter even after Brother Sam’s death. The story feels back on track with ‘Sin of Omission,’though truthfully anything after the pointlessness of ‘Nebraska’feels like a welcome relief.