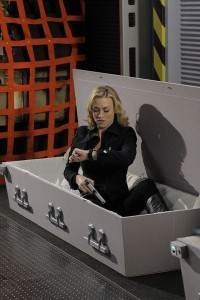 Chuck season 5 speeds along toward the end with its ante penultimate eleventh entry in this week’s “Chuck Vs. The Bullet Train,” as a newly Intersect-ed Sarah and Casey look to rescue Chuck from Nicholas Quinn (Angus Macfadyen) aboard a Japanese bullet train. “Chuck Vs.The Bullet Train” marks the beginning of the end for Chuck, and proves a strong start before next week’s two-hour series finale.

Well, that was certainly something, wasn’t it?

As the ante penultimate episode of Chuck, ‘Chuck Vs. The Bullet Train’had a lot of ground to cover in setting the stage for next week’s two-part finale, something the hour absolutely delivered in terms of scale. Not only did ‘Bullet Train’do an excellent job of creating an altogether exciting story for Team Bartowski, but managed to raise stakes in a palpable way. From the moment the title crawl unfolds along the bullet-trains track like a big-screen Chuck movie we’ll never see, it became apparent that we’d be in for a treat with these final three hours, lovingly crafted to keep us invested in the present while reminding us of years past.

As I brought up with last week’s ‘Chuck Vs. Bo,’it feels good for the series to return to its roots by finally bringing the Intersect back into the equation as a plot device. After all, the Intersect and the players governing it were what set the series in motion in the first place, and even with all the progress the characters have made beyond the device it’d feel disrespectful to simply cast aside something so crucial to the show’s mythology. Not only that, but the Intersect as a literal and figurative device provides a means of tying all of Chuck‘s lead and supporting characters together in one narrative, especially now that the show has evolved beyond any hang-ups about having Devon, Ellie, Morgan and Alex coordinate with Chuck, Sarah and Casey for missions. It’s a real accomplishment how full-circle things have come for Chuck to see everyone working together on what drove the show’s conflict in the first place

I’d be interested to know if providing Sarah with the Intersect ever arose as a possibility during the more formative years of Chuck, given how quckly the development unfolds across ‘Chuck Vs. The Bullet Train.’Morgan had at least three episodes before his behavioral shifts became apparent, whereas Sarah’s excessive (and righteously enthusiastic) use of the device pushes her from flippy spin-kicking super-spy to amnesiac mental case within the course of a single episode. It does offer up a compelling bit of tragedy to have Sarah’s entire memory of the last five years undone, a development mostly unanticipated by the hour spent trying to extract the device from her head.

I’m ordinarily not a fan of memory loss stories (especially this late in the game) given they provide little more than quick excuse to pit characters against one another before hitting a reset button, but in Chuck‘s case it does give us a chance to mine conflicts we haven’t seen before. Not only that, but Sarah having no memory of her time in Burbank opens a welcome window for Chuck and the others to remind both her (and us) of what we enjoyed so much about the last five seasons. 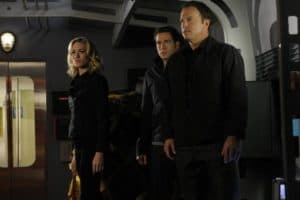 In a way, the drama of Chuck‘s series finale needs to come from Chuck vs. Sarah and the role others have to play, given how Chuck never truly built up any lasting villain to anchor its end around. Angus Macfadyen still does his best with the limited material given to him as Nicholas Quinn, but I have a hard time investing in the character given how little time we’ve spent with him, or how unimposing he seems as a villain. His brawl with Chuck across the Japanese bullet train made for a thrilling action set piece to be sure, but whatever training he rattled off beforehand wasn’t convincing enough to believe that the elder, more portly Macfadyen should be any real threat to someone as athletic or trained as Zachary Levi’s Chuck. It’d be one thing if Fedak and Schwartz wanted us to invest in Quinn’s villainy from an intellectual standpoint, but we simply don’t know enough about the character to understand why he so desperately craves the Intersect, or what he would even accomplish with it. When all is said and done it leaves a rather weak premise to build in to Chuck‘s final episodes, but hopefully Chuck can succeed in spinning its meager materials into something greater as in season finale’s past.

Along the same lines of last-minute plotting it seems odd that Chuck would essentially scrap what could have served as Jeff and Lester’s swan song last week, by overturning its stance of keeping Jeffster out of the spy world. Don’t get me wrong, I love the honesty wrought from Jeff and Lester finally learning the truth and especially that ‘Chuck Vs. The Bullet Train’could bring them to a place of taking out armed goons with flamethrowers and a mini-gun, it just seems bizarrely repetitive to have them fall into an alternate outcome of the same plot within two episodes. ‘Bullet Train’also gave some great material for Adam Baldwin in the lengths we see Casey go to protect his daughter, including betraying his team and trusting Jeffster, though now poor Big Mike seems to be the only one left out in the cold.

For me, Chuck has always struck an odd balance of teetering on the precipice of greatness and forgivable in its failures, but I’ll be very sad to see things draw to a close next week. Its second season filled me with a tremendous amount of glee (particularly this), and while the ensuing three seasons never quite hit that sentimental high, Chuck deserved more love than it got.

So…would a comic-book continuation be out of the question? Just sayin’.