Home
Television
‘BlacKkKlansman’ Is Spike Lee’s Smartest, Sharpest and Most Incendiary Film Since ‘Do the Right Thing’

I have to admit that I have something of a love / hate relationship with director Spike Lee (a relationship borne in no small part from Lee’s generally abrasive public persona).  Although he’s much to good of a director to make out-right stinkers the way that others of his generation often do, his work holds a remarkable — one might even say cavalier — lack of consistency.

Sometimes you get Do the Right Thing(1989), a generational touchstone that reminds everybody who sees it (by force, if necessary) that filmmaking is a medium capable of recapitulating the heartbeat of an entire generation and rocketing them toward action.  Other times you get the only okay Inside Man (2006) — a fun if ultimately vapid exercise in time-killing — or the impossibly difficult-to-watch Bamboozled (2000).  His work is invariably driven by some deep-seated passion that he needs to get out of him before it burns him alive, but it’s more often the case (at least in my experience) that his filmography is an easy pass when it has to square off against his much more consistently good competitors.

It was obvious from the start, though, that BlacKkKlansman (2018) was going to be different: a show-stopping return to form that reminded us (again, by force if necessary) of what caliber of filmmaker we were dealing with here.  I mean, with a (mostly) true story this preposterous, produced by this particular filmmaker in this racially charged climate, how could it possibly be anything else.  It’s like Do the Right Thing all over again, only this time Lee is even smarter, more experienced and, if possibly, even more righteously angry than before.

Our story opens on Ron Stallworth (John David Washington, son of the legendary Denzel Washington), a straight-laced Black man trying to break Colorado Springs’ police force’s color barrier.  And although he makes it in the force, maintaining the records room in the basement wasn’t exactly the kind of job he hoped to be assigned to when he signed up.  When a chance undercover assignment (keeping tabs on the Black attendees’ reactions to Black activist’s speech at a local college) energizes him to get more involved in protecting his community, Stallworth launches his own investigation into a startup chapter of the KKK located right in his own backyard. 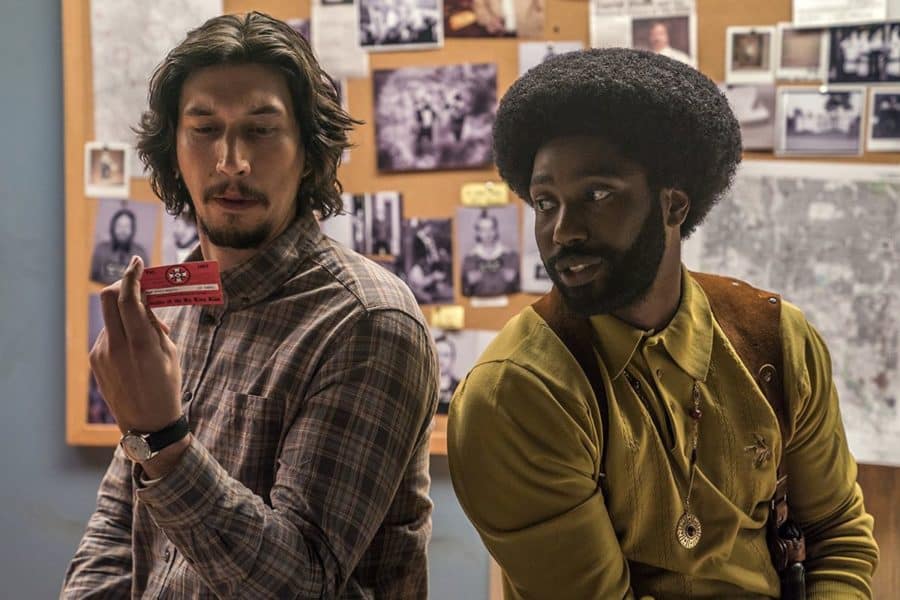 After establishing contact with the group over the phone and ingratiating himself with their leader, his superiors begrudgingly greenlight his investigation.  While he continues to be the Klan’s telephonic point-of-contact, White officer Flip Zimmerman (Adam Driver) goes undercover as the other Ron Stallworth: the well-spoken racist looking to raise some Hell in Colorado Springs.

Although the premise of a Black police officer joining the KKK to help bring it down from the inside (with the help from a Jewish partner) is riotously funny on its own merits — a fact that is played up in everything from the movie’s trailer to its posters — the movie really isn’t a comedy.  Aside from its hilarious setup, the movie plays straight with its premise of an undercover (if admittedly unorthodox) police procedural.  We get the usual assortment of sting operations, car chases, nearly-blown covers and escalating sense of something just out-of-sight about to tear apart this already pressure-cooked community. 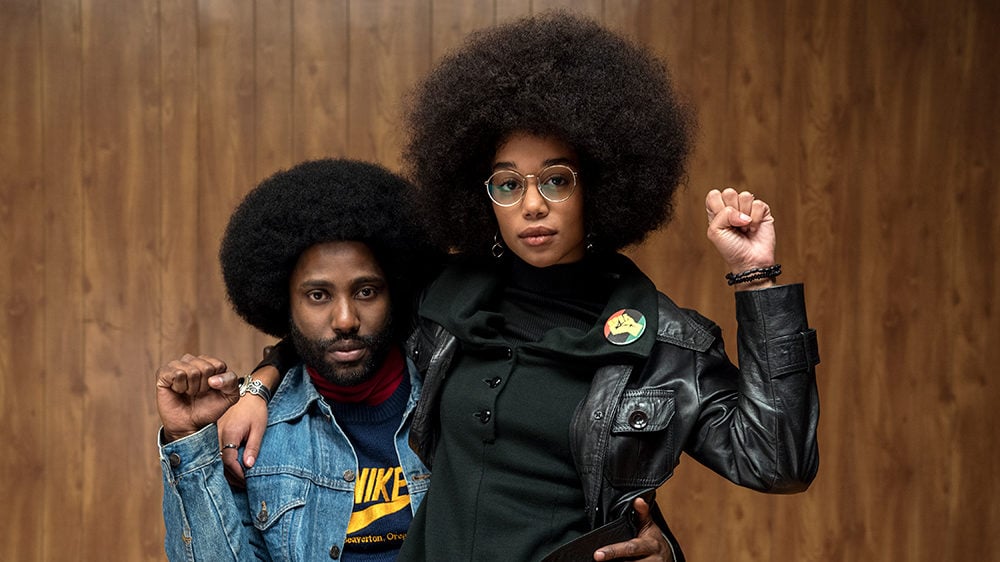 You see, as the Klansmen start marching inexorably toward an even more explosive brand of domestic terrorism than we’ve already seen from them at this stage of the game, the resident Black community is beginning to rile themselves into action at the everyday injustices that they’re faced with every day: not simply the KKK or an incendiary visit from their reprehensible leader David Duke (Topher Grace), but from their own untrustworthy and racist police force (both historically and contemporaneously), from the wider world of oppression facing their people in the rest of the country and from the revisited injustices still within living memory.  We watch as Stallworth’s girlfriend, the fiery Patrice Dumas (Laura Harrier), president of the Colorado College Black Student Union and firebrand activist for the Black cause, continues to buck the systemic oppression brought to bear on her for her outspoken beliefs.  As the film progresses, these increasingly include the position that the racist system designed to keep her (and those like her) ‘in their place’ cannot be adequately changed from within, a position that is obviously at odds with Stallworth’s earnest attempts to do exactly that.

Like Sorry to Bother You (2018), the movie plays as if Lee somehow managed to sneak onto a Hollywood late one night and had to finish his movie before anybody found out what he was doing: a feeling that is at odds with Lee’s veteran status within the industry, but can’t help but be endearing as it becomes obvious that what missteps he does make with BlacKkKlansman are borne of passion — an itching need inside his bones to get everything and anything he’s been shuttering up inside of him out in the open in one fell swoop.  This includes stopping the actual movie dead in its tracks to focus in on powerful Black speakers tell their personal stories and a playful debate between lovers about their favorite Black films and filmmakers.  While not strictly necessary for the narrative, they do serve to highlight the cultural (in addition to legal and personal) injustices done to the Black community over the centuries and celebrating what largely unappreciated steps they’ve taken to rectify those wrongs.

And if that means that we have to hear about Black man coming to terms with having cheered Tarzan on as he slaughtered the natives on the big screen or debating the merits of Shaft (1971) versus Foxy Brown (1974), then so be it.  It’s a conversation that feels as necessary as it is overdue, even if this precise movie often doesn’t feel like the ideal place for it.  Because if not here, then when?  It clearly isn’t going to happen unless dedicated filmmakers like Lee himself push it through to audiences.

Even with its various dips and digressions throughout the course of its narrative, BlacKkKlansman is a remarkable accomplishment: every bit the worthy successor to Do the Right Thing that I feel we never properly got from Lee.  It’s a powerful, even monumental exercise in filmmaking that stands out as a major accomplishment in a year already so full of similarly excellent motion pictures.  And don’t even get me started with its ending: a white-knuckled coda whose sly placement in the film can’t help but get the blood screaming in the heads of every self-respecting human being about to leave the theater and rejoin the world.