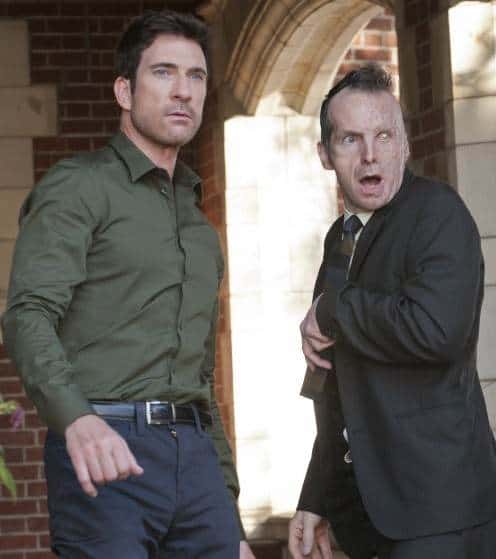 Back in 1983, the younger version of Moira (Alexandra Breckinridge) we (and Ben) have grown accustomed to leering at folds sheets in the house, when the house’s owner makes drunken advances on her. She resists but doesn’t have time to fight him off before the man’s wife saunters into the room and fires a gun to get their attention: it’s a younger Constance (Jessica Lange)! She shoots Moira dead, and then her husband, before collapsing into uncontrollable crying. Meanwhile, the shot at Moira landed squarely in her now-glassy eye…

Returning to good old 2011, Ben (Dylan McDermott) and Vivien (Connie Britton) argue about money, as apparently Ben’s facetious use of a bad investment tied all their funds up in the home, preventing them from easily selling the house. Vivien meets with the realtor to talk about selling, who resists defensively but ultimately caves when Viv threatens to sue her unless she find a way to sell the house quickly. Young/old Moira fixes Ben some coffee before his next session, and in a moment alone finds Constance in the house stealing silverware! The two share a tense argument about neither wanting to stay ‘in this world,’and Moira asserts that Constance ‘needs to pay for what she’s done.’

Ben’s session with a boring divorcee (True Blood‘s Adina porter) quickly turns into a mystery when he finds himself unable to concentrate, and suddenly winds up in the yard with blood on his hands. He finds Moira bent over inside cleaning blood off the floors, and playing coy with his missing tape recorder. Ben threatens Moira physically, until Vivien walks in and sees him threatening an old maid! Vivien agrees to forget about the incident, but storms out when Vivien even suggests the possibility of taking her job. Ben’s ‘paranoia’and ‘crazed guilt’aren’t the only problems for Viv though, as apparently a tour group regularly passes the property to identify it as a ‘murder house!’

Ben again confronts Moira for the missing tape recorder, but gets sidetracked when a new patient arrives in his study: Hayden (Kate Mara), his mistress from Boston, who reveals that she didn’t have an abortion after all, and will move so that Ben can raise his child! Meanwhile, a detective stops by asking Ben about the missing patient, Sally Freeman. There’s nothing yet that points to Ben, but its of interest to note that the officer sees Moira as the young, attractive maid too! 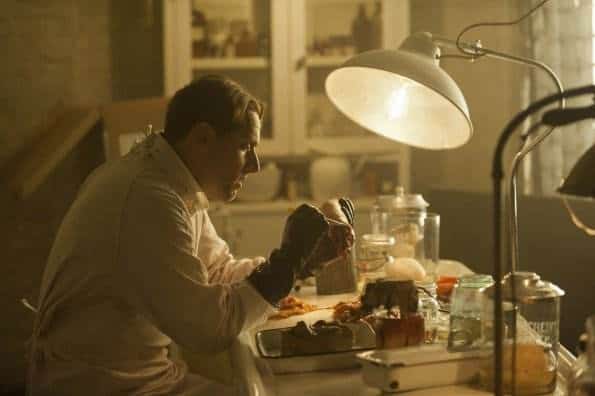 Vivian discreetly takes the murder tour herself, and learns more of the history of her own house, built in 1922 by a doctor to the stars, who slowly develop a ‘Frankenstein Complex,’and took to supporting his wife and child with back-alley abortions set up by the wife. When she snaps out of it, Vivian finds herself bleeding between the legs, and runs into her own home. At the doctor’s office, all breathe a sigh of relief as the blood comes from normal spotting, nothing harmful to the baby, though Ben himself passes out from thoughts of Hayden!

While Ben jogs later in the park, Larry Harvey (Denis O’Hare) once again confronts the house’s current owner and asks for money for headshots and to run lines. Ben flatly refuses, and blacks out again, waking up in his yard again with a shovel. He begins digging, while Moira looks on from above, and Constance warns him to mind his stress through advice of home improvements for the yard. Meanwhile, Vivien entertains a potential buyer for the home, who looks suspiciously like the wife of the house’s first owner, and knows a great many details of the house’s construction, disliking any modern improvements. Before Vivien can even serve her tea, the woman (who has a giant gaping wound on the back of her head) disappears!

Ben’s favorite detective shows up again, as apparently his patient Salli Freeman was found, having attempted suicide after their session, and in possession of Ben’s missing recorder! Ben’s only real crime was sucking as Salli flipped out during the session at Ben seeming bored, and slashed her own wrists, running out. Meanwhile, Vivien and Violet (Taissa Farmiga) go to look at a new apartment to rent, but Violet insists that she’ll run away if they do, given their current house is ‘where they survived.’

Ben accuses Moira of drugging his coffee with opiate, but before they can debate further Hayden shows up 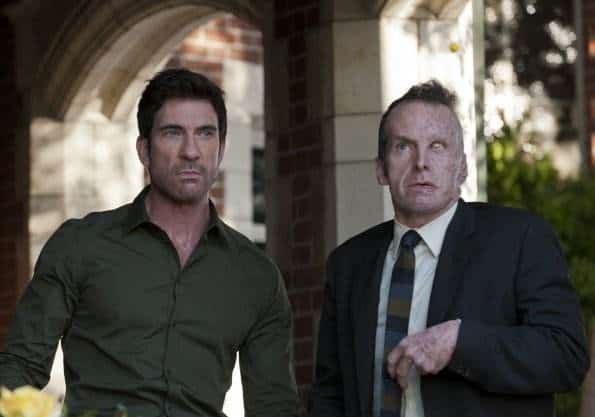 again in a rage, looking to tell Vivien of her pregnancy! Ben calms her down and talks her into discussing the matter over a meal, but before she’s even off the property Larry Harvey clocks her in the face with a shovel! He bashes her head in before Ben has a chance to stop him, and frantically offers to bury the body in exchange for headshot money. As he digs, he uncovers a skeleton in a maid uniform (presumably Moira), and lays Hayden down on top of her. Later, Ben cements over the dug patch and builds a gazebo atop it. Constance snickers to Moira, who’s been watching from the window above, ‘Now you’re stuck here forever.’

And what’s the ghostly woman of the house from earlier doing watching over Vivien as she sleeps? Join us next week for an all-new episode of American Horror Story on FX!